The Hail Mary of a Protestant 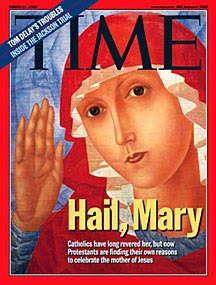 In honor of Mary's Feast of Annunciation, I dedicate this post most especially to our Protestant and Born Again Christian brothers and sisters who view the Blessed Virgin as an obstacle in their relationship with our Lord and Savior. It is my prayer that you will all begin to appreciate Mary's unique role in salvation history even as we differ in our dogmatic beliefs and doctrines. Please read also this article Mary in Islam and Protestantism for a more in-depth view of this subject.

The Hail Mary of a Protestant
(A true story)

A little six-year-old Protestant boy had often heard his Catholic companions reciting the prayer "Hail Mary." He liked it so much that he copied it, memorized it and would recite it every day. "Look, Mommy, what a beautiful prayer," he said to his mother one day.

"Never again say it," answered the mother. "It is a superstitious prayer of Catholics who adore idols and think Mary a goddess. After all, she is a woman like any other. Come on, take this Bible and read it. It contains everything that we are bound to do and have to do." From that day on the little boy discontinued his daily "Hail Mary" and gave himself more time to reading the Bible instead.

One day, while reading the Gospel, he came across the passage about the Annunciation of the Angel to Our Lady. Full of joy, the little boy ran to his mother and said: "Mommy, I have found the 'Hail Mary' in the Bible which says: 'Hail full of grace, the Lord is with thee, blessed art thou amongst women.' Why do you call it a superstitious prayer?"

On another occasion he found that beautiful Salutation of St. Elizabeth to the Virgin Mary and the wonderful canticle MAGNIFICAT in which Mary foretold that "the generations would call her blessed."

He said no more about it to his mother but started to recite the "Hail Mary" every day as before. He felt pleasure in addressing those charming words to the Mother of Jesus, our Savior.

When he was fourteen, he one day heard a discussion on Our Lady among the members of his family. Every one said that Mary was a common woman like any other woman. The boy, after listening to their erroneous reasoning could not bear it any longer, and full of indignation, he interrupted them, saying:

"Mary is not like any other children of Adam, stained with sin. No! The Angel called her FULL OF GRACE AND BLESSED AMONGST WOMEN. Mary is the Mother of Jesus Christ and consequently Mother of God. There is no higher dignity to which a creature can be raised. The Gospel says that the generations will proclaim her blessed and you are trying to despise her and look down on her. Your spirit is not the spirit of the Gospel or of the Bible which you proclaim to be the foundation of the Christian religion."

So deep was the impression which the boy's talk had made that his mother many times cried out sorrowfully: "Oh my God! I fear that this son of mine will one day join the Catholic religion, the religion of Popes!" And indeed, not very long afterwards, having made a serious study of both Protestantism and Catholicism, the boy found the latter to be the only true religion and embraced it and became one of its most ardent apostles.

Some time after his conversion, he met his married sister who rebuked him and said indignantly: "You little know how much I love my children. Should any one of them desire to become a Catholic, I would sooner pierce his heart with a dagger than allow him to embrace the religion of the Popes!"

Her anger and temper were as furious as those of St. Paul before his conversion. However, she would change her ways, just as St. Paul did on his way to Damascus. It so happened that one of her sons fell dangerously ill and the doctors gave up hope of recovery. Her brother then approached her and spoke to her affectionately, saying:

"My dear sister, you naturally wish to have your child cured. Very well, then, do what I ask you to do. Follow me, let us pray one 'Hail Mary' and promise God that, if your son recovers his health, you would seriously study the Catholic doctrine, and should you come to the conclusion that Catholicism is the only true religion, you would embrace it no matter what the sacrifices may be."

His sister was somewhat reluctant at the beginning, but as she wished for her son's recovery, she accepted her brother's proposal and recited the "Hail Mary" together with him. The next day her son was completely cured. The mother fulfilled her promise and she studied the Catholic doctrine. After long preparation she received Baptism together with her whole family, thanking her brother for being an apostle to her.

The story was related during a sermon given by the Rev. Fr. Tuckwell. "Brethren," he went on and said, "the boy who became a Catholic and converted his sister to Catholicism dedicated his whole life to the service of God. He is the priest who is speaking to you now! What I am I owe to Our Lady. You, too, my dear brethren, be entirely dedicated also to Our Lady and never let a day pass without saying the beautiful prayer, 'Hail Mary', and your Rosary. Ask her to enlighten the minds of Protestants who are separated from the true Church of Christ founded on the Rock (Peter) and 'against whom the gates of hell shall never prevail.'"


“Is Christ only to be adored? Or is the holy Mother of God rather not to be honoured? This is the woman who crushed the Serpent’s head. Hear us. For your Son denies you nothing”.
- Martin Luther, Father of the Protestant Reformation 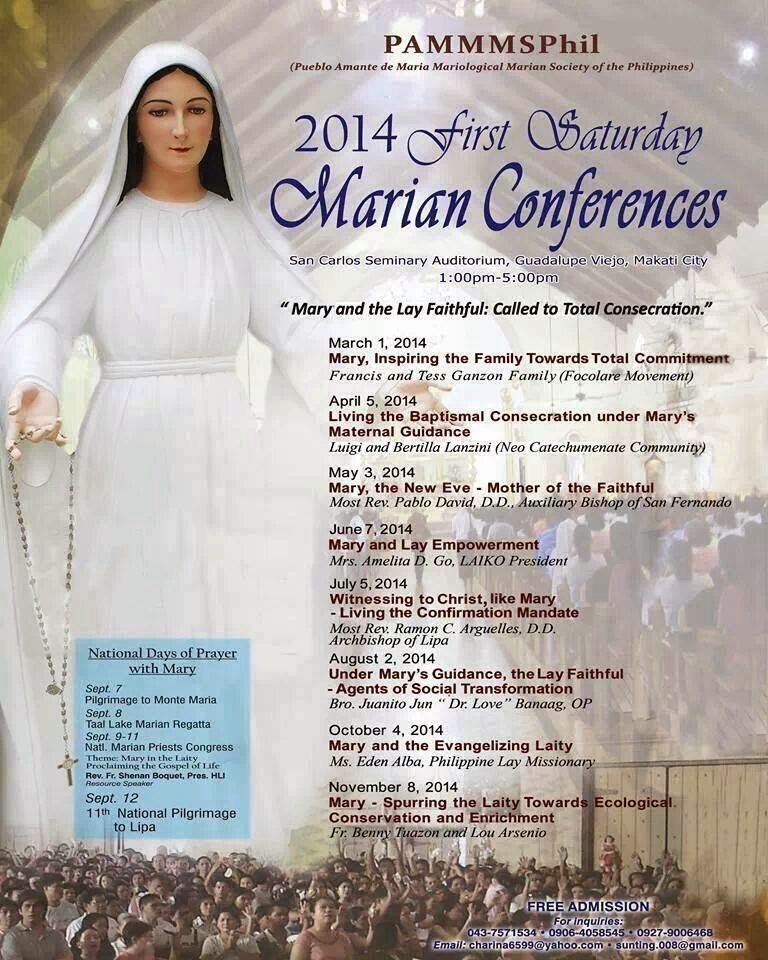 If you're free on Saturdays, you can attend this year's First Saturday Marian Conferences at San Carlos Seminary Auditorium, Guadalupe, Makati. The theme of this year's conference centers around the role of the laity. Refer to the poster above for specific topics.