Same-Sex 'Marriage' and the Marxist Agenda 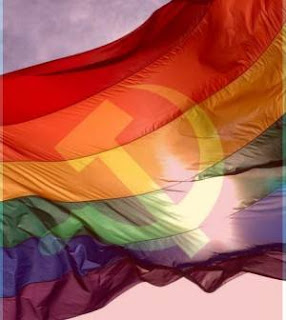 Did you think that the SCOTUS ruling upholding the legality of same-sex marriage in the United States was just about tolerance and marriage equality rights? Think again.

The Marxist Agenda Behind the Rainbow
by Douglas Hagmann


If you think Friday’s Supreme Court decision was about equality or equal rights for the three percent of the American population (at the expense of the 97 percent), you couldn’t be more wrong. If you think that Friday’s decision has no impact on you because you don’t care what people do in the privacy of their bedrooms, you couldn’t be more wrong. If you think the homosexual agenda is about tolerance, diversity or other slick marketing buzzwords, you are not only wrong, but sorely misinformed, misguided or you are purposely facilitating a lie.

America has a huge problem right now. Multiple problems, in fact, but like the victims of a train wreck, we must do triage so we can apply treatment in order of importance. The blunt force trauma inflicted upon America by five rogue members of our judiciary, redefining marriage as a result of a highly potent cabal of activists intent on America’s destruction, certainly moves this problem up the list of importance.

In order to know how to fix the problem, however, you’ve got to know as much about the problem as possible. You need accurate information, not the spin of some morally bankrupt politician or the spin of agenda-driven talking heads who confine their discourse to the captive narrative of the archaic and completely fictitious right-left political paradigm. The next federal election will not solve our problems, for our problems are so threatening to our life and liberty, we might not have the time.

As I’ve already suggested, those reveling in the rainbow of diversity and whose chests swell with pride at the luminous display at the seat of American power fall into one of two groups: the ignorant, misguided, brainwashed and/or spiritually, morally and selfishly decadent (i.e. unwitting dupes), or the facilitators of one of the biggest lies ever perpetrated on our nation. What we have witnessed is not the beginning of tolerance and diversity, but its unceremonious demise through the completion of one giant step in the orchestrated dismantling of our country that is part of a much larger plan. It is a critical and vitally important step toward the formation of a “new world order” that no “dignified” journalist or syndicated talk show host will ever acknowledge exists.

The destruction of the moral fabric of America was set in motion generations ago under not a rainbow flag, but a Communist flag. Who better to usher in this mortal wound to our nation than the Manchurian Marxist Messiah of mystery and dubious origin and his cabal of renegade abettors?

What we see taking place today might not have been completely stopped, but it might have been slowed had those who held the attention of Christian conservatives pressed the legitimate issue of the eligibility and allegiance of Barack Hussein Obama as a candidate for the highest office in America. Alas, it was not to be, as those most revered by the conservative right dutifully parroted the lie that the background, origin and constitutional eligibility of Barack Hussein Obama, or Barry Soetoro, perhaps, was nothing but a distraction.

Over the din of their vocal objections, or in some instances, assurances and more lies, those of us in search of the unadulterated truth can hear the unmistakable sickening sound of our freedoms, liberties and rights Cheyne-Stoking as their traumatic death approaches. Yet, those who fought us then continue to dismiss us today. They adhere to a choreographed narrative that fits within the script of the big lie, and one that is as shrewdly narrow as it is factually shallow. For this, it appears, requires less intellectual aptitude of the entranced American than the necessary first steps of a full recovery would require.

Meanwhile, Americans are served their daily portion of the big lie – in this case, sold under the pretext of diversity and tolerance and illustrated by the silly mantra “love wins.” Love, much like equal rights, has absolutely nothing to do with the larger agenda of rending America’s moral fabric. Redefining marriage and the traditional family is a well-documented plank of the Communist takeover of America, a tactic to destroy our Constitutional Republic, and an admission requirement to enter a system of global government.


The Homosexual Agenda is rooted in Communism

The activist homosexual agenda in America has its roots in Communism. On January 10, 1963, Representative A. S. Herlong, Jr. of Florida read 45 goals of Communism in America into the Congressional Record. Listed at #26 was to “present homosexuality, degeneracy, and promiscuity as normal, natural and healthy.” What was considered abhorrent behavior and a sin by all of the world’s major religions only a half-century ago is not only accepted and ostensibly “legitimized” today, but is being openly celebrated at the White House and state houses across America.

Why is virtually no one asking how approximately three-(3) percent of our population has seemingly succeeded in changing the moral and legal landscape for 97 percent of the population? How did this change happen so quickly? It nearly mirrors the meteoric rise of Barack Hussein Obama from a virtual unknown to the putative President.

The answers exist in history. The promotion of the fraudulent research of Alfred Kinsey, the highly organized and well-funded efforts of Marxist Harry Hays, founder of the Mattachine Society in 1950, the effective use of Hollywood and Madison Avenue, to the refinement of the homosexual agenda by homosexual activists Marshall Kirk and Hunter Madsen in the 1980’s – when they made public their very specific tactics in their book, After the Ball: How America Will Conquer Its Fear and Hatred of Gays in the ’90s, were all cogs in the larger mechanism designed to destroy the morality of America.

When you read the dissenting opinions of Justices Thomas and Scalia in last Friday’s SCOTUS decision, you will see some very chilling statements, including these from Justice Clarence Thomas (Please read and consider these in the context of the above):

“The Court’s decision today is at odds not only with the Constitution, but with the principles upon which our Nation was built. Since well before 1787, liberty has been understood as freedom from government action, not entitlement to government benefits.”

“Aside from undermining the political processes that protect our liberty, the majority’s decision threatens the religious liberty our Nation has long sought to protect.”

“Our Constitution—like the Declaration of Independence before it—was predicated on a simple truth: One’s liberty, not to mention one’s dignity, was something to be shielded from—not provided by—the State. Today’s decision casts that truth aside. In its haste to reach a desired result, the majority misapplies a clause focused on “due process” to afford substantive rights, disregards the most plausible understanding of the “liberty” protected by that clause, and distorts the principles on which this Nation was founded. Its decision will have inestimable consequences for our Constitution and our society.”

The end of the beginning

Many people believe that this ruling will remedy perceived injustices against a (falsely) significant segment of our population. These same people believe that this ruling marks the end of a long and arduous journey for equal rights. They are wrong, for this is merely the end of the beginning. The global activists, the Marxists and Communists propelling this agenda don’t care about rights, despite the pretty packaging. There is no pot of gold at the end of this rainbow.

Having been empowered by SCOTUS, enablers and abettors at the Executive branch and others in power, they are now “all in” to complete the destruction of our nation. The agenda is as big as the lie.

Barring any immediate intervention and unified civil disobedience, what will follow will be exponentially worse to what will be left of our nation. Unless immediate action is taken, the mortal blow that was delivered to our country last week will become fatal.

It is imperative that we understand the depth, breath and scope of the lie and the globalist, Communist agenda behind it. It is important we identify the agents of destruction. They, and their agenda, must be fully exposed.

Alternatively, the Cheyne-Stoke respirations of our liberties and freedoms we (still) enjoy under our Constitutional Republic will cease. Not because of their recovery, however, but due to their death.

Douglas J. Hagmann has been a veteran investigator in the private sector for nearly three decades, working for many Fortune 100 companies investigating high-value fraud cases. He is an author, public speaker and the senior host of the Hagmann & Hagmann Report.

Posted by Courage Philippines at 12:07 AM