Sodomy - A Sin that Cries to Heaven 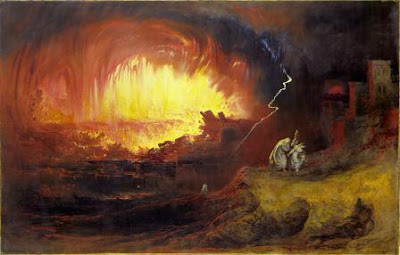 I once heard a certain pastor of a gay church here in the Philippines said on a national TV debate that often quoted argument that Sodom and Gomorrah were punished because of the sin of inhospitality. Seriously? Fire and brimstone punishment for being inhospitable? Sodomy is so grave that it is one of the sins that cries to heaven. It is a sin against nature and an abomination in the eyes of God. Persist in this sin and you will be lost forever. Repentance is the only way out and like Lot and his daughters never ever look back.


And the Lord said: The cry of Sodom and Gomorrah is multiplied, and their sin is become exceedingly grievous. I will go down and see whether they have done according to the cry that is come to me: or whether it be not so, that I may know. – Gen. 18:20-21

The “Sin of Sodom” is described as “carnal sin against nature, which is a voluntary shedding of the seed of nature, out of the due use of marriage, or lust with a different sex.”1 Given modernity’s substitution of God and Nature with the will of the individual as an autonomous moral universe, sodomy – more specifically active homosexuality, not orientation – has become part of the new post-Christian norm. Neither Divine Law nor Natural Law form an external guide for the modern man; thus, the only boundary of autonomous individual is the autonomy of another. The boundary for what is and is not moral appears to be consent. Consequently, moral dialogue has been flattened to mere platitudes, e.g., this isn’t hurting anyone, it’s my body and my choice, love is love. Many often comment on the modern West’s apparent lack of morality, but few comment on the fact the West has lost the vocabulary to even discuss on morality.2

A few distinctions. First, the issue of same-sex marriage is not a religious issue, it is a rational and philosophical one. Considerations of marriage as a natural institution, the moral import of natural law, and the harmony between unity and procreation in sex are all within the purview of the natural virtues and reason; however, as geology and astronomy may both tell us the Earth is round, so too can the two sciences of theology and philosophy tell us the same thing.3 For example, no one holds that the commandment thou shall not murder was unknown before God revealed it on Mt. Sinai. It was revelation confirming reason, a demonstration of the greater truth that grace perfects nature.

The discussion for this list is less about same-sex marriage and more about a proper interpretation of Scripture. It is a conversation about those who do see Sacred Scripture as a moral authority, but attempt to harmonize their modernist views on sexuality with the Holy Bible. Typically, this leads to “new” interpretations of Scriptures on homosexuality. These interpretations are often weak and out of context, but since they serve the end that people want people follow them. A tenuous intellectual argument will always serve as long as it achieves the end people desire, especially if that end is wrapped in autonomy and sexual gratification.


On the Interpretation of Hospitality Violations

Those who argue that Sodom and Gomorrah should be understood outside any homosexual context often submit that the divine judgment of those cities was due to violations of Ancient Near East hospitality laws. In The Sin of Sodom & Gomorrah is not about Hospitality, the good Msgr. Pope offers a strong rebuttal. In part:

First there is a text from Ezekiel:

Now this was the sin of your sister Sodom: She and her daughters were arrogant, overfed and unconcerned; they did not help the poor and needy. They were haughty and did abominable things before me. Therefore I did away with them as you have seen. (Ezekiel 16:49-50)

Now this is the text used most often by those who deny any homosexual context in the sin of Sodom. And, to be fair, it does add a dimension to the outcry God hears. There are clearly additional sins at work in the outcry: pride, excess or greed, and indifference to the poor and needy. But there are also mentioned here unspecified “abominations.” The Hebrew word is תּוֹעֵבָ֖ה (tō·w·‘ê·ḇāh) which refers to any number of things God considers especially detestable, such as worshiping idols, immolating children, wrongful marriage and also homosexual acts. For example, Leviticus 18:22 uses the word in this context: Do not lie with a man as one lies with a woman; it is an abomination.4

But of itself, this text from Ezekiel does remind us that widespread homosexuality is not the only sin of Sodom. And while the abomination mentioned here may not be specified exactly, there is another Scriptural text that does specify things more clearly for us. It is from the Letter of Jude:

In a similar way, Sodom and Gomorrah and the surrounding towns gave themselves up to sexual immorality and perversion. They serve as an example of those who suffer the punishment of eternal fire. In the very same way, these dreamers pollute their own bodies, reject authority and slander celestial beings. (Jude 7-8)

And thus it is specified that the central sin of Sodom involved “sexual immorality (ἐκπορνεύσασαι) and perversion (ἀπελθοῦσαι ὀπίσω σαρκὸς ἑτέρας – literally having departed to strange or different flesh).” And this would comport with the description of widespread homosexual practice in Sodom wherein the practitioners of this sin are described in Genesis 19 as including, “all the men from every part of the city of Sodom—both young and old.”

Hence we see that, while we should avoid seeing the sin of Sodom as only widespread homosexual acts (for what city has only one sin?), we cannot avoid that the Scriptures do teach that homosexual acts are central to the sins of Sodom which cry to heaven for vengeance, and for which God saw fit to bring a fiery end.

Genesis 19 speaks plainly of the sin, Ezekiel 16 broadens the description but retains the word “abomination,” and Jude 7 clearly attests to sexual perversion as being the central sin with which Sodom and Gomorrah were connected.

One of the takeaways from the good monsignor’s commentary is that sexual perversion is not the only sin of which Sodom and Gomorrah were guilty. Many allow themselves to be confused by arguments that attempt to replace the primary sin (sexual perversion in a homosexual context) with the secondary sins.5 And while the discussion here is not necessarily why homosexuality is a sin that cries to heaven, it should serve to clarify that it is impossible to read the Sodom and Gomorrah narrative outside a homosexual context.

1. Douay Catholic Catechism of 1649, Q. 928 – Thank you to Taylor Marshal for posting this excerpt on his blog. Marshall makes the point that America has failed “four for four” on these sins that cry out to heaven.

2. Moral Vocabulary: When he was Archbishop of Denver, His Excellency Chaput gave a talk that incorporated the problem of the lost moral vocabulary. Repentance & Renewal, 2010.

4. SPL Note on Leviticus & Homosexuality: When Lev. 18:22 is cited as an undeniable condemnation of homosexuality in Scripture, it is often met with certain sophist rebuttals, e.g., Leviticus also outlaws shaving, tattoos, and eating pork. First note that these statements are an assertion, not an argument. The underlying argument that is needed on both sides is how one decides what is still valid law and what is not. In short, as Catholics we know that the OT is perfected in the NT and the NT is foreshadowed in the OT; thus, we see in Scripture Christ’s intent to perfect the law, not abolish it. Certain laws, however, demand a change in order to be perfected. For example, the OT law of circumcision was perfected in the Sacrament of Baptism. The Levitical laws on purity are a subject we see both St. Peter and St. Paul address. Homosexuality, on the other hand, was restated as a sin by St. Paul. In reverse, one could always ask those who use this argument against Leviticus what their hermeneutic for understanding the OT and NT is. It will, inevitably, be their own autonomous will. For more see Catholic Answers on the subject.

5. Further Commentary on the Hospitality View: In addition to Msgr. Pope’s article, Catholic Answers addresses it in their treatment of homosexuality in general and Fr. Longenecker comments on it in his article The Sin of Sodom. In related studies, the good Msgr. Pope has written about the wrath of God and several other articles on homosexuality (Biblical Teaching on Homosexuality, the “Lost Generation of the Church,” and a Pastor’s Attempt to Teaching the Bible on Homosexuality). Catholicism holds that the laws of the State are drawn from the laws of nature, and the laws of nature are distinct from the divine laws in Scripture. To understanding the relationship of laws and the context in which Catholicism advocates for the legal defense of natural marriage, see Think like a Catholic – 7 Questions on the Four Laws. A collection of Catholic documents on sexuality and the pastoral care of homosexually oriented person is found at 5 Catholic Documents on Family, Sex, and Homosexuality. Those who still question the traditional interpretation of the Church on homosexuality may reference Early Church: 12 Quotes on Homosexuality & Other Sexual Sins.
Posted by Courage Philippines at 12:14 PM