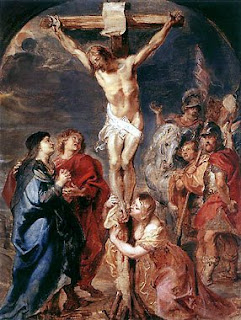 Composition of Place – Envision Jesus nailed to the Cross and enduring His greatest pains. You hear Him pray to His Father on behalf of those who crucify Him.

Prayer of Petition – O my Jesus and my Master! I beg of Thee the grace not only to forgive my enemies, but to love them and do good to them.

First Point
Jesus showed an astonishingly great love for His enemies. Go back in your thoughts, my soul, to Calvary, and ponder with attention Jesus’ Love for His enemies. See Him suspended from three nails on an infamous gibbet. He is wounded all over, dripping with blood, plunged in a sea of pain, and is close to breathing His last. See, also, the throng of people of every age, condition, and state – young and old, lords and ladies and common people, Hebrews and Gentiles, scribes and Pharisees, elders of the people and high priests – and these people, instead of having pity (which only a few show at the sight of pain), are all burning with an implacable mortal hatred for Him. As we ponder the more noteworthy circumstances of this hatred, consider whether it should have been hard and difficult for Him to love a people so savage and inhuman.

The first circumstance was the triumphant glee of His enemies – Here, my soul, you should not consider Jesus as a mere man, but as both God and Man (as indeed He was), to Whose gaze everyone’s heart lay bare, as He saw even their most secret thoughts. As He hung suffering on the Cross, what evil did He not find in the hearts of those cruel people? He perceived some who rejoiced at the sight of Him nailed to the Cross, who were congratulating themselves on the arrival, at last, of the hour they had hoped for – the hour of seeing the One they accused of being a seducer, an impostor, a deceiver, hanging from a Cross. He perceived that others were approving the sentence passed against Him, and were judging that it was quite just (because they thought He was a scoundrel and blasphemer) to be assigned no other execution than one on a cross. He saw that these men took great delight and danced, as it were, with glee at seeing Him suffer, at seeing Him refused the smallest relief for His thirst, at seeing men rather increase His thirst and add to His torments by giving Him gall and vinegar to drink. He perceived others impatiently awaiting His death and wanting His Name blotted out from everyone’s memory. All of this Jesus saw, and saw it in the hearts of the very ones for whom He came down from Heaven to earth, leaving an immensely happy condition and submitting to human miseries. Yes, He saw these things in the hearts of those on whose behalf He had worked so many miracles and for whom He was dying. At the sight of all this, what must have been the quality of His love for such people?

The second circumstance was the jeers and insults of His enemies – When someone is in his death agony, having been turned over to an executioner to be put to death, it is an act of compassion to show him sympathy…something that is not refused even the most wayward criminal. When a criminal is presented on the gallows, no matter how deserving of death he may be, a great silence is observed by everyone, and even the hardest hearts show him some indications of pity and compassion; and the more painful the execution to which the man is condemned, the more apparent is this sympathy. But Jesus was not counted worthy of this much. The more cruel His pains were and the more savage the execution procedures, so much the more bitter were the jeers, so much the more cutting was the mockery with which He was insulted by His enemies.

“Bah!” some were saying, “If You boasted that You would destroy the temple and rebuild it in three days, show Your Power now and rescue Yourself from the Cross!” Others argued, “If You made such a boast of being the Son of God and of always trusting in Him, why does He not come now to deliver You?”

The third circumstance was His enemies’ stubbornness – It would not have been difficult for Jesus to love His enemies if in the end they had recognized and detested their sin; but the obstinacy of these wicked people was too great. The elements, even though they were lifeless, bore witness to Jesus’ innocence. The sky shrouded itself with mourning. The sun grew dark. Boulders cracked in pieces. The veil of the temple ripped into two parts. The earth trembled and quaked. The people were eyewitnesses of these astounding events; but in spite of them, they did not stop abusing Him. Rather, becoming even more furious against the Lord, they kept mocking Him, cursing Him and blaspheming Him. They did not cease tormenting Him until they saw that He was dead. And yet Jesus bore it all with a heroic patience. And even forgetting His Pains and the many abuses they were vomiting forth against Him into His very Face in His agonizing condition, turning to His Eternal Father He pleaded with Him and took up their defense, so that He might obtain pardon for their wicked behavior…

Could a love be found that resembles this? It would not have been hard for Jesus to love His enemies if He had foreseen that they would stop hating Him, at least after His death. But He could not even have this consolation. He foresaw that most of them would make a joke of all those miracles which would be worked on His behalf after His Resurrection. He foresaw that they would continue in their obstinacy until death and that they would blaspheme forever in hell even more than the demons do. It surely must have been a very hard thing for Jesus to love a people so unjust and evil. But in spite of all this, instead of giving Himself over to anger and seeking vengeance for His extremely painful, degrading death, He ceased not from loving even the most sinful ones, nor from wishing that His Divine Blood might give life to those who had shed it so brutally.

My soul, enter within yourself here, and see who those persons are whom you find it difficult to love. Are they, by any chance, false witnesses who have falsely accused you in court? Are they cruel characters who have sometimes made you drink the gall and vinegar of pain, hardship, privation, and injustice? Are they assassins who are thirsty for your blood and want to nail you, like Jesus, to a cross? Ah! There may be someone perhaps who gives you an unpleasant look. There may be someone who lets a thoughtless word escape from his mouth. And will you have difficulty loving these persons, after seeing Jesus love even His unmerciful persecutors? Compare well your enemies with those of Jesus.

Affective Acts
In this light, I am a man truly lacking love! Oh, what a sad, distressing thought! – That I am a man who is poor and needy as regards love! And yet, who am I? I am a soul chosen from among thousands and thousands to follow Jesus. I am a Christian soul who spends so much time daily meditating on the example of Jesus Christ, Who even loved those who crucified Him. In spite of all this, I am a creature poor and needy with regard to love! This is so, after so many years of my life as a Christian have passed, after so many insights, graces, and interior inspirations, after so many aids and opportunities! Ah! What reason I have to detest my sluggishness!


"If you love those who love you, what reward will you get? Are not even the tax collectors doing that? And if you greet only your brothers, what are you doing more than others? Do not even pagans do that?" - Matthew 5:46-47
Posted by Courage Philippines at 5:04 AM