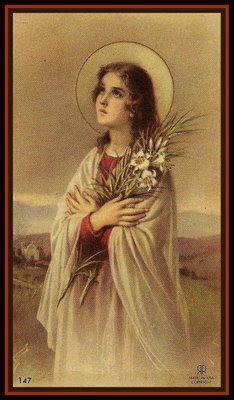 Today, July 6, the Church celebrates the feast day of St. Maria Goretti, a martyr for purity. I am sure most of you know her life story by now so no need to narrate her biography here. I was reflecting on her life and her relevance to the secular world of ours and I was preoccupied with the question of whether she is a red martyr or a white martyr. Obviously, we need to define the terms first. After googling for it, I came upon these explanations:

Red martyrdom occurs when a person sheds their blood for Christ. Throughout the history of the Church, there have been many of these brave souls who died rather than forsake the Lord. (e.g., first century Christian martyrs who were persecuted and fed to the lions, our very own San Lorenzo Ruiz who chose death rather than renounce the faith, etc.)

White martyrdom is a martyrdom without blood, without the violent taking of life. White martyrdom is a total offering to God, a “dying” to the world and its allurements. A white martyr willingly gives up worldly concerns and makes his or her life a perpetual pilgrimage. A white martyr lives a life of heroic devotion for Him alone, eagerly uniting that devotion with Christ’s sufferings.
I have come to conclusion then that St. Maria Goretti - although she died in defense of the virtue of purity - was actually a red martyr because there was shedding of blood. It is that the object of her martyrdom was not about faith in Christ but rather the defense of the virtue of purity.

Okay that is now settled. The big question for us now is "sa pula o sa puti"? Either way you will encounter violence of one kind or the other. Martyrdom is literally and figuratively dying to one's self in order to gain a life of complete and perfect union with God. Choosing chastity in our sex-crazy world for the love of God is one way we can live it and we must always remember the bravery and courage of St. Maria Goretti who chose death rather than sin.

-oOo-
Alan Medinger - Home, Rejoicing
I received this e-mail last week about the passing of Alan Medinger, a Christian leader and pioneer of the ex-gay movement. He is a big loss, but his books and writings will continue to inspire countless men and women to hope for change. Alan is one of my favorite SSA writers because of his balanced psychospiritual approach to the subject of homosexuality.

It is with great sadness I share with you that Regeneration's founder, Alan Medinger, passed away Monday, June 28th. Alan started Regeneration over three decades ago, and in the years that followed, he and his dear wife, Willa, were like a father and mother to literally thousands of men and women seeking help and hope, including me.

Alan passed away peacefully in his sleep early Monday morning. Many of you know about Alan's faithfulness in morning devotional times with the Lord. (He often said they were where all his newsletter articles came to him.) I have been thinking it was Jesus Himself who woke Alan on Monday, his faith now become sight.

We invite all of you to pray with us for Alan's family--his children, his grandchildren, and especially Willa--today and in the days to come.

Alan was a deeply loved man by many. For me, he was a mentor, a model of faith, a father, and my dear friend. Regeneration's board and staff are grateful for the trail he blazed, and honored to carry it forward as we together continue to follow the Lord.

To those who do not know Alan Medinger, click here to read his life story.
Posted by Courage Philippines at 12:09 AM