Miriam Quiambao Stands Up Against the LGBT Community 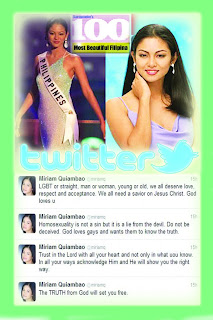 Well, I applaud Ms. Quiambao's courage to stand up for the truth. I support her conviction on the issue of not allowing transgenders to join a pageant that is meant for "real women". Miriam has nothing to apologize for what she said. The LGBT's reaction to her statement clearly shows who's got a problem.


Former Miss Universe runner-up and beauty queen Miriam Quiambao just did the unthinkable by making herself an enemy of the LGBT community.

She has caught the ire of the LGBT sector when she tweeted last  Sunday: “Homosexuality is not a sin but it is a lie from the devil. Do not be deceived. God loves gays and wants them to know the truth.”


This all started when she publicly disagreed with the Miss Universe Organization’s policy of accepting transgenders in the pageant. She fanned the flames further after a guest appearance on Boy Abunda’s talk show “The Bottomline” Saturday night on ABS-CBN in which she was quoted as saying, “Homosexuality is not the one that makes you a sinner. Actually, sexual immorality is what makes you a sinner.”

The backlash against Quiambao has been severe but not altogether surprising. Later that same day, Miriam also initially issued a qualified apology with the tweet, “I’m sorry if the truth offends some people…” before tweeting the more categorical, “I’m sorry LGBT. Perhaps I was too harsh with the words I used. Will do my best to be more sensitive.”

Quiambao is a born-again Christian who constantly uses Twitter in order to spread her faith.

It seems that some people have become so distorted in their view of the truth. Right has become wrong and wrong has become right. We are living in an upside-down world.

Miriam Quiambao has spoken the truth about homosexuality and that truth has hurt a lot of people. But in order to avoid the truth altogether, they take it on the messenger. There is nothing categorically wrong with what Ms. Quiambao said and therefore no apologies were needed, in my opinion. At the very least, all she did was to voice out what she thought of the homosexual lifestyle. In fact, she hit the nail right on its head as her Tweet contained the “love the sinner, hate the sin” message.

We need to rally behind Ms. Quiambao in order to tell her that she is not alone in her belief. To be truly pro-life we need to “put to rout all that is not life”, as Thoreau puts it. The homosexual lifestyle is a direct manifestation of the culture of death and is in direct conflict with God’s plan for humanity.

RH Activist Carlos Celdran has some of the most scathing tweets for Quiambao:  “When did you become a freakshow? Dahell? Didn’t see this one coming. Wow. You need help, woman.”

Celdran and the LGBT community are quick to cry ‘foul’ when it comes to ‘discrimination’ against homosexuals. Almost automatically, they unleash their verbal counter-attack, calling anyone who goes against their lifestyle ‘homophobic’ or ‘bigot’ or ‘hater’.

They cry for equality and freedom of speech and expression when they go about their homosexual activities, but when it is our turn to express our disagreement over their lifestyle, we are then called bigots and haters. What they are saying is that we have to tolerate them and the homosexual culture that has already crept its way into the media and entertainment industry, but they cannot tolerate us when we disapprove of their actions.

The LGBT were free to express themselves. But Miriam cannot. Such is the double standard these LGBT communities shove down our throats.

Weren’t Celdran et al the same guys who cried “freedom of expression” at the Kulo exhibit at the CCP?

Posted by Courage Philippines at 9:53 AM