Where To Go During An Earthquake

[Note: With all the earthquakes happening around the world, most recently in New Zealand and Japan, you should read this life-saving article.]

Where to Go During an Earthquake
Remember that stuff about hiding under a table or standing in a doorway? Well, forget it! This is a real eye opener. It could save your life someday.

EXCERPT FROM DOUG COPP'S ARTICLE ON 'THE TRIANGLE OF LIFE'

My name is Doug Copp. I am the Rescue Chief and Disaster Manager of the American Rescue Team International (ARTI ), the world's most experienced rescue team. The information in this article will save lives in an earthquake.

I have crawled inside 875 collapsed buildings, worked with rescue teams from 60 countries, founded rescue teams in several countries, and I am a member of many rescue teams from many countries. I was the United Nations expert in Disaster Mitigation for two years, and have worked at every major disaster in the world since 1985, except for simultaneous disasters.

The first building I ever crawled inside of was a school in Mexico City during the 1985 earthquake. Every child was under its desk. Every child was crushed to the thickness of their bones. They could have survived by lying down next to their desks in the aisles. It was obscene -- unnecessary.

Simply stated, when buildings collapse, the weight of the ceilings falling upon the objects or furniture inside crushes these objects, leaving a space or void next to them - NOT under them. This space is what I call the 'triangle of life'. The larger the object, the stronger, the less it will compact. The less the object compacts, the larger the void, the greater the probability that the person who is using this void for safety will not be injured. The next time you watch collapsed buildings, on television, count the 'triangles' you see formed. They are everywhere. It is the most common shape, you will see, in a collapsed building.

TIPS FOR EARTHQUAKE SAFETY
1) Most everyone who simply 'ducks and covers' when building collapse are crushed to death. People who get under objects, like desks or cars, are crushed.

2) Cats, dogs and babies often naturally curl up in the fetal position. You should too in an earthquake. It is a natural safety/survival instinct. You can survive in a smaller void. Get next to an object, next to a sofa, next to a bed, next to a large bulky object that will compress slightly but leave a void next to it.

4) If you are in bed during the night and an earthquake occurs, simply roll off the bed. A safe void will exist around the bed. Hotels can achieve a much greater survival rate in earthquakes, simply by posting a sign on the back of the door of every room telling occupants to lie down on the floor, next to the bottom of the bed during an earthquake.

5) If an earthquake happens and you cannot easily escape by getting out the door or window, then lie down and curl up in the fetal position next to a sofa, or large chair.

10) I discovered, while crawling inside of collapsed newspaper offices and other offices with a lot of paper, that paper does not compact. Large voids are found surrounding stacks of paper.

Spread the word and save someone's life...

The entire world is experiencing natural calamities so be prepared!

'We are but angels with one wing, it takes two to fly'

In 1996 we made a film, which proved my survival methodology to be correct. The Turkish Federal Government, City of Istanbul , University of Istanbul Case Productions and ARTI cooperated to film this practical, scientific test. We collapsed a school and a home with 20 mannequins inside. Ten mannequins did 'duck and cover,' and ten mannequins I used in my 'triangle of life' survival method. After the simulated earthquake collapse we crawled through the rubble and entered the building to film and document the results. The film, in which I practiced my survival techniques under directly observable, scientific conditions , relevant to building collapse, showed there would have been zero percent survival for those doing duck and cover.

There would likely have been 100 percent survivability for people using my method of the 'triangle of life.' This film has been seen by millions of viewers on television in Turkey and the rest of Europe, and it was seen in the USA , Canada and Latin America on the TV program Real TV.

"Triangle of Life"
Without listening or reading, simply by looking at the following self-explanatory photos, you can learn more than in a thousand words about how to protect yourself during a major earthquake... 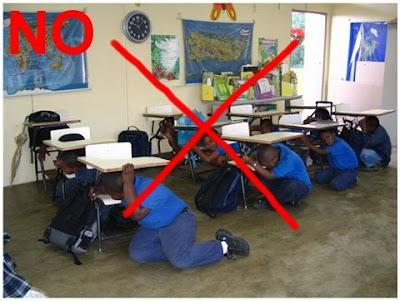 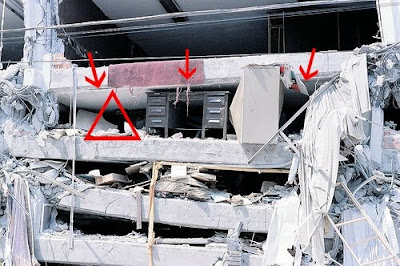 If you are inside a vehicle, come out and sit or lie down next to it. If something falls on the vehicle, it will leave an empty space along the sides. See below: 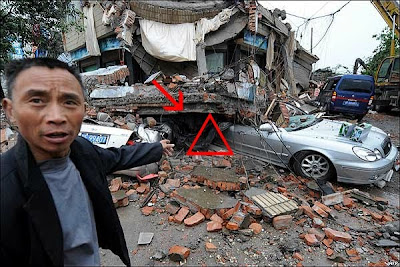 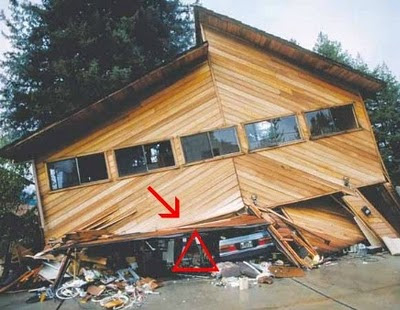 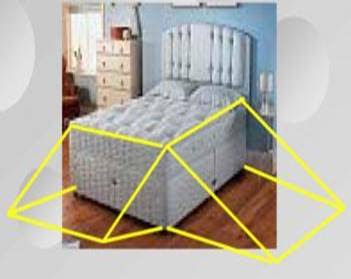 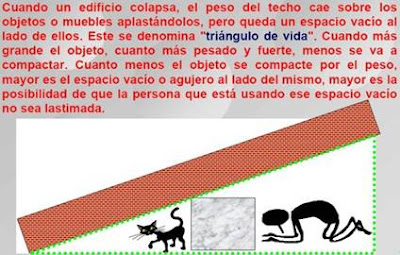 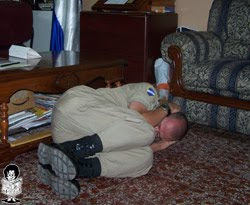 American Rescue Team International（ARTI）is said to be the World's most experienced rescue team and disaster management-mitigation organization.
Posted by Courage Philippines at 12:07 AM