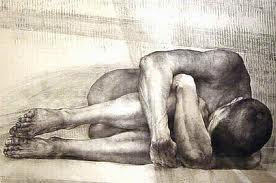 Notes taken from our Lenten Recollection earlier this month on healing our shame.


Shame, which has to do with man's separation from himself, gives rise to man's problems with intimacy. The core characteristic of shame is the disowning of self, which demands to be covered up. Shame calls for secrecy and darkness. One who experiences shame has an adversarial relationship with himself. He separates from himself to survive because the true and wounded self is felt to be too bad and unacceptable. It is, therefore, disowned and pushed away into darkness. Shame, in essence, self-hatred.

It is enough to say here that shame enters the heart early in the developmental stages of a child's life, frequently because of abandonment, abuse, and shaming actions of parents. The child bears the charged emotional milieu of the family home. Perhaps Mom or Dad used to rage out of control, used guilt to modify behavior, expressed direct doubt or condemnation towards the child, or perpetuated direct sexual, verbal, or physical abuse. Just as often, the shaming process happened indirectly as parents, in denial of their shame, imparted strong feelings of fear, anger, grief, or anxiety. When these feelings were not explained, the child had no choice but to internalize and carry them. This, the child subtly began to take in these feelings and store them as his own.

Dysfunctional parents use denial to avoid their own feelings of shame. To successfully avoid their own sense of "badness", they must act as if they are perfect or "shameless", by projecting their inner reality onto situations outside of themselves. In this projection, the child becomes the source of bad feelings and is blamed for the feeling state of the parent. The nonverbal message to the child amounts to, "If you would just stop doing whatever you are doing, I would not be so out of control." Even though this message is not given directly, the child must conclude that he is the problem. He must come to this conclusion because his parents are not helping him decode the situation by owning their own feelings. Slowly, a core identity of worthlessness is built and reinforced within the child. He begins to believe that if he could just get better, Mom or Dad wouldn't be so upset. So he tries harder (perfectionism) or develops some other survival strategy to make his pain go away.

At some point, the shamed self becomes too painful to live with and the false self begins to form and harden into place. This false self has many faces: the addict, the perfectionist, the dominant and controlling one, the worm, the shy one, the clown, the scapegoat. All of them are cover-ups for shame. Most shame develops in the early stages of a child's personality formation. Because of this, the split-off self is the child-like part of the person. Often a person with shame will experience an inability to attach to others, or to experience intimacy with others in relationship. The place in his heart that should be able to trust other and be vulnerable in relationships has been hated and sequestered away.

For the addict, changing and becoming like a child must be preceded by reconnecting with the part of him or her that can be child-like. He or she must integrate with that split-off part. Healing shame is accomplished through loving the child-like part of oneself, accepting its weaknesses and wounds, and reintegrating with it into the personality. The addict must welcome this child part with the help of Jesus. This reconciliation is a process that starts with discovering and experiencing negative emotions towards self first, then tracing them to the deeper attitudes and beliefs that embody self-hatred. Next comes confession to the Lord, repentance of sinful attitudes towards self, and sometimes, the building of relationship with the lost part, leading to healing.

Healing shame is almost always accompanied by healing of traumatic memories (from which issue diseased attitudes), and forgiveness of perpetrators - usually parents. Through this process, the faulty belief system is healed. What things are hidden from those who cannot access the childlike parts of themselves - the fact that their name is written in heaven. Jesus refers to a man's adoption into the family of God - the experiential knowledge that he is loved by the Father. Jesus reveals the Father through the part of man that holds the child-like qualities. It is through this part of him that the addict can receive the love of the Father's adoption. Receiving God's love in the depths of his heart can displace the lies fostered by years of shame-based parenting, or by significant events of abuse. The Father's love dismantles the driving power of trying to avoid the feelings of shame. Our call is to press into His love, by embracing the healing process, and letting Jesus walk with us into our most wounded places. As shame is healed, addiction withers and is replaced by inner peace, love and the ability to risk and connect in friendships.
Posted by Courage Philippines at 12:31 AM

Email ThisBlogThis!Share to TwitterShare to FacebookShare to Pinterest
Labels: psychospiritual