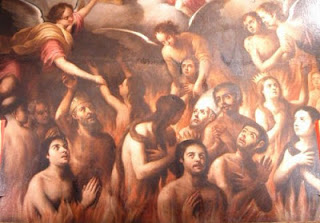 Here is an excerpt from Treatise on Purgatory by St. Catherine of Genoa. You'll gain a deeper understanding and appreciation of what Purgatory is all about after reading this.

CHAPTER VIII
Of the necessity of Purgatory. How terrible it is.
When I look at God, I see no gate to Paradise, and yet because God is all mercy he who wills enters there. God stands before us with open arms to receive us into His glory. But well I see the divine essence to be of such purity, greater far than can be imagined, that the soul in which there is even the least note of imperfection would rather cast itself into a thousand Hells than find itself thus stained in the presence of the Divine Majesty. Therefore the soul, understanding that Purgatory has been ordained to take away those stains, casts itself therein, and seems to itself to have found great mercy in that it can rid itself there of the impediment which is the stain of sin.

No tongue can tell nor explain, no mind understand, the grievousness of Purgatory. But I, though I see that there is in Purgatory as much pain as in Hell, yet see the soul which has the least stain of imperfection accepting Purgatory, as I have said, as though it were a mercy, and holding its pains of no account as compared with the least stain which hinders a soul in its love. I seem to see that the pain which souls in Purgatory endure because of whatever in them displeases God, that is what they have willfully done against His so great goodness, is greater than any other pain they feel in Purgatory. And this is because, being in grace, they see the truth and the grievousness of the hindrance which stays them from drawing near to God.


CHAPTER XV
Reproaches which the souls in Purgatory make to people in the world.
And so that blessed soul, seeing the aforesaid things by the divine light, said: "I would fain send up a cry so loud that it would put fear in all men on the earth. I would say to them: 'Wretches, why do you let yourselves be thus blinded by the world, you whose need is so great and grievous, as you will know at the moment of death, and who make no provision for it whatsoever?'

"You have all taken shelter beneath hope in God's mercy, which is, you say, very great, but you see not that this great goodness of God will judge you for having gone against the will of so good a Lord. His goodness should constrain you to do all His will, not give you hope in ill-doing, for His justice cannot fail but in one way or another must needs be fully satisfied.

"Cease to hug yourselves, saying: 'I will confess my sins and then receive plenary indulgence, and at that moment I shall be purged of all my sins and thus shall be saved.' Think of the confession and the contrition needed for that plenary indulgence, so hardly come by that, if you knew, you would tremble in great fear, more sure you would never win it than that you ever could."


Posted by Courage Philippines at 11:00 AM