A Complaint Against GMA-7's My Husband's Lover 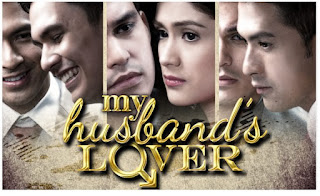 Bro. Rollie, our group leader in Courage Philippines, just recently filed a letter of complaint addressed to the MTRCB against the airing of GMA-7's latest 'telenovela' My Husband's Lover because of its strong pro-gay message. He has also been fighting it out on MHL FB page with Suzette Doctolero herself, but sadly he was being severely criticized in that FB group discussion because of his dissenting comments against the airing of MHL and for promoting the truth about same-sex attraction.

I've read that this 'bekiserye' is popular not only among the gay crowd but even with the non-gay crowd, which is quite an interesting phenomenon. There are so many things going for MHL. It is the first of its kind to be shown on Philippine TV which undoubtedly contributes much to its popularity. You've got top-rate actors and actresses portraying their respective roles excellently. Not to mention all the hype and publicity that the media has created for its leading characters Tom Rodriguez (Vincent) and Dennis Trillo (Eric), tagging them with the monicker TomDen, one of the country's "hottest loveteam" at the moment. And of course, Kuh's rendition of its theme song 'One More Try' really adds to all that drama as well.  That's showbusiness what do you expect?

On the flip side, there is really nothing much to expect from MHL. The story of a married man who falls in love with another man has been tackled over and over again in most gay indie films. The character of Vincent's father, who is a retired homophobic military general is so stereotypical. You can almost predict where all this will lead to - the rekindling of old flame, infidelity, suspicion, discovery of the affair, and the ensuing family conflict and drama. Who will Vincent choose in the end - his wife or his lover? Sounds familiar? You bet.

I am a concerned citizen, and I would like to write about my disturbed spirit over GMA7's television show "My Husband's Lover" being aired every night as part of their Telebabad series of soap operas.

I am concerned that this show is guided by the gay agenda that deems to desensitize our viewing public with the following ideas about homosexuality:

* Homosexuality is a gift of nature.

* Homosexuals are preoccupied seeking romantic sexual relationships with the same-sex.

* The Church is homophobic and propagate a culture of hate against homosexual persons.

I am a person with same-sex attractions, and I see these ideas as perversions of the truth about homosexuality, as I counter these lies with the following truths:

* A homosexual is a person with same-sex attractions.

* There is a difference between homosexual attraction and homosexual behavior.

* Homosexuality is not all of genetics but more of environment.

* Change is difficult but possible for the homosexual.

* There are groups available to help homosexuals who decide to change.

* God, through the Church, loves the homosexual person.

I am concerned because I have been engaging in dialogue with the writers of this show on their facebook account, but it seems that they are adamant in presenting their own beliefs about family life and individual human rights (gay rights). With this, it is most likely that they will transmit their own beliefs and values through this show upon our innocently watching viewing public.

I have reminded them of their responsibility as media persons to inculcate authentic Filipino values to our public, but they just scoffed at me and attacked me personally.

I would like to ask your good office to put this show under strict monitoring, for though this show is rated Strict Parental Guidance, we are after the fair treatment of this show on such a sensitive topic such as homosexuality.

Homosexual persons should be treated with respect and compassion, but the promotion of the homosexual lifestyle (having sex with persons of the same sex) as a good thing is a disservice to the general viewing public. Please note that I have viewed the latest data from DOH (March 2013) on HIV cases and homosexual acts is listed as the number one factor of transmitting this disease. This fact along with my own (and others like me) personal journey out of homosexuality begs to disagree.

We owe it to our people to show programs that will lead them to a better understanding of reality, but still inculcating authentic Filipino values about family and marriage.

I hope that my request of strict monitoring of this show would be considered.

Thank you so much and God bless you!

Addendum:  To those who want to express their disgust with GMA7's My Husband's Lover which has the subtle message of promoting homosexuality among our young people - please sign the petition below:

Posted by Courage Philippines at 2:46 PM