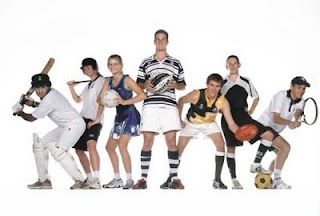 I had a blast (and sore muscles) yesterday at our Courage sportsfest! Rarely do I find an opportunity to engage in sports activities and so I decided to join in. I'm actually having some sort of delayed-onset muscle soreness today. Walking around and going up and down stairs can be a torment. That's what you get when you don't exercise much. This week I'm going to post an article on sports wounding. Admittedly, this is one of my major issues and I will talk more about it in my next post. Below are some bits of information I collected on the internet to better explain this wounding.


Boys suffering gender-identity confusion (GID) will suffer many related psychological and social problems. They are more likely to be anxious, depressed, and lonely. Many parents recognize that their GID children are not happy. These children are moody and easily upset and often lament that they do not fit in.

Eventually the prehomosexual child usually becomes the "kitchen window boy" who looks out longingly at the other boys in the neighborhood, wishing he could play with the children who reject and tease him. Instead, he ends up staying inside with Mom to clean the house with her and bake cookies. Parents of these children are quite right to be concerned, because this pattern, seen as early as preschool and first grade, portends many other adjustment problems later in life.

Some GID boys defy the usual stereotype of timidity and passivity and, instead, are superior-acting or extremely egocentric. Such boys "insist on their own rules in games...and when they do not get their way, they either withdraw or have temper tantrums."

Others are excessively worried about getting hurt and bruised, with a sense of fragility about their bodies. Some of these boys have an almost phobic reaction to aggressive language. They often complain about other children's rough language, and tehy seem genuinely frightened by aggressive behavior.

As Dr. Richard Fitzgibbons notes, fear of sports and other boys' aggression sets the sage for a weak masculine identity:

Weak masculine identity is easily identified and, in my clinical experience, is the major cause of [homosexuality] in men. Surprisingly, it can be an outgrowth of weak eye-hand coordination which results in an inability to play sports well. This condition is usually accompanied by severe peer rejection. In a sports-oriented culture such as our own, if a young boy is unable to throw, catch, or kick a ball, he is likely to be excluded, isolated, and ridiculed.

Continued rejection can be a major source of conflict for a child and teenager. In an attempt to overcome feelings of loneliness and inadequacy, he may spend more time on academic studies or fostering comfortable friendships with girls. The "sports wound" will negatively affect the boy's image of himself, his relationships with peers, his gender identity, and his body image. His negative view of his masculinity and his loneliness can lead him to crave the masculinity of his male peers.

Others studies found poor coordination and difficulties in playing contact sports to be common among prehomosexual boys. Similarly, a number of studies show that such boys appear to have trouble distinguishing between normal rough-and-tumble play and the deliberate intent by other boys to hurt them.

Dutch psychologist Dr. Gerard van Aardweg agrees with Dr. Fitzgibbons's observations regarding fear of aggressive play. The tendency of boys to be cautious and unaggressive and do not participate in team sports is a universal finding recollected in samples of clinical as well as nonclinical homosexuals and is also true in other cultures.

In elementary school, other children will begin to call these gender-confused boys "sissies," "faggots," "queers," or "gays." Most mistakenly and tragically, their teachers may even identify them as "gay children," and, thus labeled by their own teachers, the children may even come to think of themselves as "born gay." They may not be sure what being "gay" means, but they begin to suspect that they are very different indeed. Before long, their emotional estrangement from their own sex will begin to surface in same-sex romantic longings.

In 1950s and 1960s when it was possible to do research on the causes of homosexuality, a study of 500 males in New York who viewed themselves as homosexuals, revealed that over 90% of them had problems with athletic coordination and were subjected to various degrees of humiliating rejection by their peers when young. Many of these males related that not only did they feel like they were failures as males because they either were not good at or did not like sports, but they also felt that they disappointed their fathers, whom they thought had hoped that they would do well athletically. The lack of interest in sports interfered with the father-son closeness and bonding.

The need for male acceptance is essential for the development of a positive male identity and it precedes the adolescent stage of development. If self-acceptance is not attained through peer affirmation, rarely will a boy find himself attracted to girls.

In the initial stages of treatment people with this painful hurt regularly find so much inner rage toward those who rejected them that they are unable to forgive. This resentment, while primarily meant for peers, is also often with God for failing to give them athletic abilities. In attempting to resolve this anger, Lou, who was the victim of sibling and peer ridicule because of his lack of coordination in sports and who held back pursuing priesthood because of his homosexual attractions, expressed to God his profound disappointment with him for withholding those gifts. He verbalized to God a strong sense that he had abandoned him to the terrible suffering of peer ridicule, loneliness, and profound masculine insecurity simply because he was not given athletic abilities. Lou first needed to let go of his anger with God before he could release his rage of his peers.

He accomplished this by taking his resentment to the sacrament of reconciliation on a regular basis for his anger with his peers and with God. After his trust in God increased he was able to give up the multiple levels of peer resentment by reflecting that revenge belongs to God and by thinking that he was powerless over his anger and wanted to turn it over to God. These spiritual interventions into his childhood and adolescent rage brought him significant emotional relief and slowly broke the control which those who had hurt him had over his self-esteem. As his anger decreased, his insight and understanding grew concerning those who had made him feel inadequate. Lou came to see that the peers who had tormented him were jealous of his superior intelligence, were themselves very insecure and came from troubled families. This understanding later enabled him to feel compassion for his childhood tormentors, enabling him later to want to try to forgive them.

Making inroads into Lou's deep resentment was an essential part of the initial stages of his recovery. Then he needed healing of the wound of peer rejection, loneliness, and masculine insecurity. Traditional therapy cannot resolve these emotional wounds. Fortunately, Catholic spirituality can through a process of growing in an awareness of the reality of the accepting and loving presence of the Lord with the individual during the painful times of isolation in childhood, adolescence, and adult life. This knowledge of Jesus with one as a loving best friend begins by meditation. The individual tries to picture the Lord with him on the sports fields, in the gym and in the neighborhood accepting and affirming him. This meditation is often combined with reflecting upon the Lord communicating scriptural passages to the person such as John 15:9, "As the Father has loved me, so I have loved you". At times Lou would visualize the Lord being between himself and those who were ridiculing him, telling him that he loved him very much and that he never betrayed him.

Lou also became more aware of the Lord's unique love and friendship by making regular holy hours. During those times he gave to the Lord his masculine insecurity and loneliness and tried to be open to receive his love. As he became more aware of the Lord being with him as a young adult, his trust in Jesus grew, enabling him to become more open to his loving presence earlier in his life. Also, his trust in the Lord's love increased by going to the Eucharist more often and there specifically asking for healing of his homosexual attractions and the emotional pain causing them. Finally, a spiritual director helped him in numerous ways, especially in hearing the Lord speak to him through the scriptures.

**********
Acknowledgments:
1. A Parent's Guide to Preventing Homosexuality by Linda Ames Nicolosi
2. The Truth About Homosexuality by Fr. John Harvey, O.S.F.S.
3. The Origins and Healing of Homosexual Attractions and Behaviors by Richard P. Fitzgibbons, M.D.
**********

The road to manhood is a long one. It is a road of learning, trying, failing, trying again...Some boys, however, do not reach this destination. At some point the striving became too much, the defeats and failures too painful, so they opted out...[T]hey took a detour....I was one of those boys. My detour took me into the world of homosexuality. - Alan Medinger

Posted by Courage Philippines at 1:48 AM