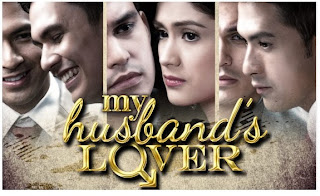 Guest post by Bro. A.  This is perhaps the closest you can get to a real-life MHL-type story.


My Husband’s Lover is a strange story, but it is a story that is familiar to me.

She was a pretty woman from the province newly married to a man she found in the city. She was pretty -- no, beautiful. A long line of suitors must have hounded her in her youth. The couple had a child, a son.

One day, what would she find inside her bedroom, but her husband and another man in an X-rated position, one that left nothing to doubt as to the two men’s sexuality/sex orientation/sexual preference? Shocked by the graphic scene, the woman left the marriage. The family would not hear of the husband for a long, long time.

After several years, the woman found another love, an old, gaunt but still good-looking mestizo who was well-traveled and talked smoothly. She was smitten. This time, she was sure he was a he. They lived happily ever after, we could say, shacking up in one corner of the city. They had a daughter. With this complex arrangement, the family fell into hard times but survived by dint of hard work.

When the old man got sick, he fell down hard and fast, leaving his family with almost nothing. By this time, the children were all grownup fending for themselves. One has left home, while the other stayed, with his own family in tow.

One day, who would reappear at the scene but the husband, who was seriously ill? He had no one and nothing but the shirt on his back. Where he came from no one knew, no one bothered to know. He desired to be taken in again, just like the old times. With much trepidation, his ex-wife decided to accept him in her humble abode, but on one condition: he would not talk to her nor she would take care of him. She had her son, his son, do the part she’d rather not do.

The son, to his credit, took good care of his dad, even though he was abandoned almost at birth. Where he got the grace to forgive no one knows up to this day, no one bothered to know. Soon the old man deteriorated until he got fatally ill from a major stroke. He would die a lonely death, although he was not entirely alone. He was with his son and his family.

His former wife could only look on, without any emotion. She was doing it only for the sake of her son, only for charity. But it would not be too soon before she exited this life as well. One day, she suddenly was struck down by the same illness. The two major players are now all gone, virtually ending the story in silence.

As to the husband’s lover, no one knew him, no one knows who and where he is right now, no one bothered to know.

But the child of the original husband and wife remains, with his wife, his five children, and ten grandchildren. Life has to go on.

My Husband’s Lover-type of stories are stories you will never hear the protagonist and other main characters to tell. They are stories mostly filtered through second-hand sources. It is because they are stories of trauma, and tremendous pain, or the most unspeakable shame possible. You just don’t publish these stories for mass consumption. You don’t tell the story with a megaphone, during primetime, when innocent viewers can get easily confused. You prefer more proper venues.

Posted by Courage Philippines at 9:41 AM