The Inconvenient Truth About The ALS Ice Bucket Challenge 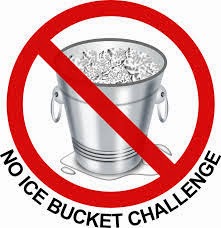 I have watched with great fascination how ordinary and famous people alike took the ALS Ice Bucket Challenge by posting a video of them being doused with ice cold water and tagging someone to do the same. The goal of course is to raise money for the ALS Foundation to help find a cure for ALS (a.k.a. Lou Gehrig's disease). There is really nothing wrong with that, but if you are planning to join the ice bucket bandwagon please consider reading this blog post first. There is more to this than meets the eye.

The Ice Bucket Challenge aims to raise awareness for amyotrophic lateral sclerosis (ALS) or Lou Gehrig’s disease. According to the website of the ALS Association (ALSA), here is how it works:


The challenge involves people getting doused with buckets of ice water on video, posting that video to social media, then nominating others to do the same, all in an effort to raise ALS awareness. People can either accept the challenge or make a donation to an ALS Charity of their choice, or do both.

Posed in this manner, there is nothing morally problematic about the nature of the challenge. Accepting the challenge does not require any donations, but helps promote the primary goal of raising ALS awareness. Those declining the challenge are encouraged to “make a donation to an ALS charity of their choice,” but there is no legal or moral obligation to do so, nor is there any requirement that a donation go to ALSA. Naturally, those who accept the challenge are also free to make a donation to an ALS charity. Some, such as the schools of the Archdiocese of Cincinnati, are choosing to accept the challenge while also making donations to other organizations that promote awareness and support for persons with ALS.

Since the challenge started trending in late July 2014, it has successfully raised awareness about the disease on a dramatic scale, accomplishing its main purpose with great creativity and fun. It has also generated more than 40 million dollars in donations to promote research into causes of ALS and the development of new treatments.

Given its size and the significant amount of research, awareness, and support work with which it is involved, ALSA has been the primary recipient of many if not most donations resulting from the challenge. ALSA has also helped to promote the challenge on its website and through social media in accordance with its good aims as a charitable organization.

In its Instruction Dignitas Personae, the Congregation for the Doctrine of the Faith speaks clearly to the moral problems with the use of embryonic stem cells, even for noble and therapeutically effective ends:

The obtaining of stem cells from a living human embryo ... invariably causes the death of the embryo and is consequently gravely illicit: “research, in such cases, irrespective of efficacious therapeutic results, is not truly at the service of humanity. In fact, this research advances through the suppression of human lives that are equal in dignity to the lives of other human individuals and to the lives of the researchers themselves. History itself has condemned such a science in the past and will condemn it in the future, not only because it lacks the light of God but also because it lacks humanity” (n. 32, quoting Pope Benedict XVI).

ALSA acknowledges that there are relevant ethical concerns surrounding the use of embryonic stem cells: "The discovery that human embryonic stem cells can be isolated and propagated in the lab with the potential of developing into all tissues of the body is a major medical breakthrough. But it has raised ethical concerns." When asked about the ALSA position on human embryonic stem cell research, Carrie Munk, a spokeswoman for the Association, noted in an e-mail to Religion News Service that the organization primarily funds adult stem cell research: “Currently, The Association is funding one study using embryonic stem cells (ESC), and the stem cell line was established many years ago under ethical guidelines set by the National Institute of Neurological Disorders and Stroke (NINDS); this research is funded by one specific donor, who is committed to this area of research,” she said. “The project is in its final phase and will come to an end very soon.” Nonetheless, the organization does not clearly rule out the prospect of funding for ESC research.

Potential donors seeking to support laudable causes, such as research for cures to serious diseases, face the challenge of exercising due diligence, so that their funds are properly utilized and not misdirected or otherwise targeted by an advocacy organization to support immoral projects.

When foundations have a generally sound list of activities but promote an intrinsically immoral activity as well (such as abortion, human embryonic stem cell research, or contraception), donors must consider the serious matter of the fungibility of donated funds. Whenever we participate in fundraising for such organizations, even if they assure us that specified funds will only be used for activities with an ethical profile, it can end up being little more than a shell game. In this sense, there is a real danger that our fundraising activities may not only engender scandal, but may even contribute to the perpetuation of grave evils like abortion and human embryonic stem cell research. The duty to affirm the dignity of human life, and associated questions of scandal resulting from a lack of clarity, can become more significant—with a corresponding need for caution about where the funding is going—when Catholic authorities or institutions such as dioceses and schools are involved.

Donors who are concerned about the misuse of funds by groups such as ALSA, Project ALS, or others should consider notifying those organizations of their reasons for choosing not to donate, encouraging them to cease advocacy and funding for ESC research, raising awareness about the immoral destruction of human life through embryonic stem cell research, and donating to alternative ALS research and advocacy groups that do not support or promote human embryonic stem cell research. Several examples of such groups can be mentioned:

The Cell Therapy Foundation specifically promotes adult stem cell research. On their website, it is possible to donate in a directed way to specific research, including ALS:

Compassionate Care ALS offers much-needed care and treatment for people living with ALS (instead of focusing on scientific research and the development of therapies): http://www.ccals.org/home.php.

Massachusetts Citizens for Life reported in a recent newsletter that the ALS Therapy Development Institute (http://www.als.net/), when asked on the phone about this issue, said they do not support research with embryonic stem cells “because they think induced pluripotent adult stem cells are the best avenue to a cure.” The newsletter also noted that “they do not have a principled objection to using embryonic stem cells but said they understand the gravity of the issue and would be very public if they change their position so donors and potential donors would be aware.”

[P.S. Feel free to forward this info as long as you include the source I posted above. Thanks.]
Posted by Courage Philippines at 8:46 PM