'I'm Attracted to Men, But I Love God More' 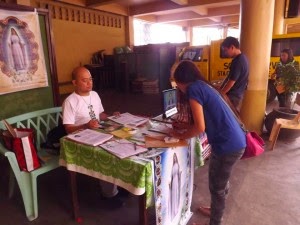 This is a brief personal testimony of Jovi Atanacio, a member of the support group After Call. Like Courage, their group also shares with our goal to live chaste lives in union with Christ in the midst of our SSA struggle, but unlike us they are not anonymous. Once again, this testimonial proves that it is possible for people struggling with same-sex attraction to live a life not dictated by one's sexual desires and urges.


Jovi Atanacio testifies that it is possible to be a faithful son of the Church and to be a person with same-sex attraction (SSA), sharing how ultimately, the faith shows homosexuals how to truly love.

“This is my cross …I may be attracted to males … but I love God more,” he said, noting how God through the Church invites all to true love.

While admitting to SSA, having been a former moderator for an After Call community of people with SSA, Atanacio has decided to remain celibate, and agrees with the Catholic position on people with same sex attraction that invites all to love, including homosexuals.

“I am free … I made the decision myself to follow and conform to God’s will and what the Church teaches … I forego of the worldly lifestyle,” he declared, confessing how years back, he was sexually promiscuous with various “casual hook ups”.

Atanacio bemoaned pro-LGBT rights camps often gloss over the fact that the Church has consistently enjoined everyone, regardless of their sexual orientation, to love.

“As surprising as it may sound, the Church today does not forbid people who experience same-sex attractions to love one another,” shared Atanacio.

He attests that the Church seems to be the only institution that stresses love for members of the LGBT community.

“We are made to love and be loved … And our lives mean nothing if we don’t experience it,” he added.

Atanacio, one of the many actively engaged in the promotion of the devotion to Lipa’s Mary, Mediatrix of All-Grace, thinks the LGBT sector is asking too much when it expects the Church to change its stance on homosexuality.

“The LGBT wants the Church to just let them be … or allow them and not call the [homosexual] acts sinful …which will never be acceptable,” he noted.

“They keep on trumpeting pride in being gays … But they’re quick to blame others when HIV cases run high, supposedly because they’re too embarrassed to buy condoms,” he added.

According to him, while many members of the same sex desire union with their romantic partners because of love, Atanacio believes true love desires more than just physical and emotional union.

He clarified, however, that chastity does not mean turning one’s back on love, pointing out it is but a profound and courageous expression of that same love.

Single and chaste, Atanacio, who also maintains the Facebook group “Wanted: Filipino Saints”, underscored the need to grow in the understanding of what love really means.

“If two members of the same sex profess love for each other, they will strive to do what is best for one other. They will encourage one another to identify themselves as beloved children of God who happen to experience same-sex attractions, rather than people who are defined by their sexual urges and happen to believe in God,” he explained, citing a Chastity Project article.

Posted by Courage Philippines at 9:08 PM