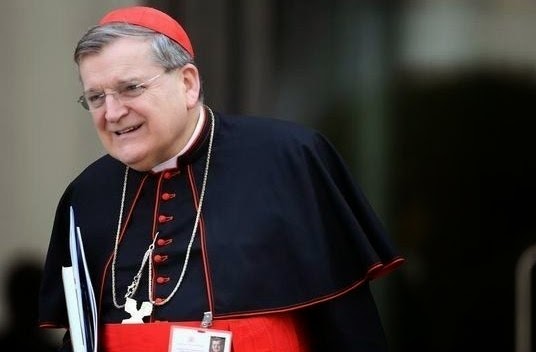 At the height of the controversial Relatio on last month's Extraordinary Synod on the Family, Cardinal Raymond Burke was one of the few who stood out in defense of the Church's teachings on homosexuality when others sought to undermine the issue. It's unfortunate that some of those who ought to speak up in defense of the truth chose to play it safe and remained silent. I'm posting here an excerpt of an interview conducted by BuzzFeed News pertaining to that topic. What a shame that he was demoted from his position as head of the Vatican's highest court, the Apostolic Signatura, and given a non-curial and largely ceremonial assignment as patron of the sovereign military order of Malta. In support of Cardinal Burke, an article was published a couple of weeks ago by a former gay activist detailing how the good cardinal, who he once despised for his 'traditional' views on homosexuality, has become instrumental in his conversion to the Catholic faith.


BuzzFeedNews: I did a story a while back reporting on a conversation that sources relayed to me between an LGBT activist and Cardinal Müller. In that conversation, the activist apparently asked Müller about the possibility of the Church possibly accepting some forms of civil unions, based on some of the comments that the pope had made and some of the positions he was understood to have taken while he was the president of the bishops conference of Argentina. Müller reportedly responded that [that decision] wasn’t up to the Pope, it was up to “us,” referring to the curia. In that thinking about how these kinds of church teachings are made, can you explain to an outsider what the relationship is between this kind of conversation and the pope’s personal thinking?

Cardinal Burke: Well I suppose the simplest way to put it is that all of us who serve the church are at the service of the truth: the truth that Christ teaches us in the church. And the Pope more than anyone else, as the pastor of the universal church, is bound to serve the truth. And so the cardinal is quite correct that the pope is not free to change the Church’s teachings with regard to the immorality of homosexual acts or the insolubility of marriage or any other truth of the faith. On the contrary, his work is to teach these truths and to insist on the discipline which reflects the truths in practice.

BFN: It sounds like there’s a tension, what we’re seeing play out in this [Synod]. It sounds like you’re saying there are some people who deliberately want to change teaching. Like the people who are supportive of some of the positions that were articulated in the Relatio are saying that they’re trying to balance the pastoral need [for actual behavior and PRACTICE] to find space for people who are living outside [contrary to] what the Church [doctrine] teaches is the appropriate lifestyle, to find a way pastorally [in ACTUAL PRACTICE] to incorporate them into the [Catholic] Community and to bring them more in line.

You’ve used very strong words about homosexuality; in a recent interview you say again that homosexual acts are always wrong and evil. Is there any middle ground [compromises or loosening up], any way to make space for LGBT people inside the Church while also adhering to church teaching?

CB: Well the Church doesn’t exclude anyone who’s of good will, even if the person is suffering from same-sex attraction or even acting on that attraction. But at the same time out of her love for the person who’s involved in sinful acts, she calls the person to conversion, in a loving way, but obviously, like a father or mother in a family, in a firm way for the person’s own good.

There never can be in the Catholic Church a difference between doctrine and practice. In other words, you can’t have a doctrine that teaches one thing and a practice which does something differently. If people don’t accept the church’s teaching on these matters than they’re not thinking with the Church and they need to examine themselves on that and correct their thinking or leave the Church if they absolutely can’t accept what the Church teaches. They’re certainly not free to change the teaching of the Church to suit their own ideas.

BFN: But as I read the Relatio — and again I’m reading this as a layperson — it seems like what they’re saying is [trying to establish] a welcoming tone. While not changing the teaching, they’re also trying to not make the primary point of contact be a fight over these lifestyle choices. While holding up that the ideal remains matrimony, they’re not going to be pushed out and harassed by virtue of not being in that arrangement.

CB: The point is that for the Church, moral teaching is never a matter of ideals. They’re understood to be real commands that we’re meant to put into practice. All of us are sinners and we have to undergo a daily conversion to live according to the moral truth, but it remains for us always compelling. It’s not just an ideal that we hold out there, that, “It would be nice if it were this way, but I can’t do it.” No, we’re called to conform ourselves to those truths.

That’s the difficulty with the Relatio, which is [a] not well expressed, and [b] does not have a good foundation neither in the sacred scriptures nor in the Church’s perennial teachings, and [c] also uses language which can be very confusing.

One of the confusions is that it confuses the person with the sinful acts. In other words, it tries to say that if the Church teaches that these acts are sinful that somehow they are turning on the people and driving them away from the Church. Well, if the individuals involved are sincere and want to live the truth of moral law, the Church is always ready to help. Even if someone sins repeatedly, the Church always stands ready to help them begin again. But the truth of the moral law remains and it is compelling. It’s for now, it’s for me, it’s not something out there, some ideal out there that would be nice to realize but it doesn’t compel me.


[Source:  Buzz Feed. For the full transcript of the interview, click here.]

[*Note:  I did some underscoring for emphasis.]

Posted by Courage Philippines at 8:13 PM