Prayer to Renew the Sanctity and Beauty of Human Sexuality 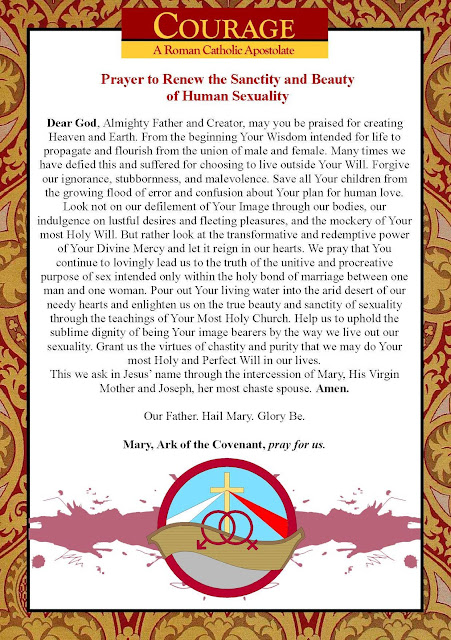 The world celebrates Gay Pride on the last week of June (in remembrance of the Stonewall riots). The Church respects and honors the dignity of all human beings including homosexuals. As Christians, we believe that their full dignity is in the identity of being redeemed children of God and that their true freedom lies in obedience to God's will. In this regard, we request an hour of adoration in June to be offered for the realization of this truth and for the above prayer, "Prayer to Renew the Sanctity and Beauty of Human Sexuality", to be said at least once on the last week of June with an act of mortification to be lovingly offered as reparation.

The LGBT community uses the rainbow as their icon. The rainbow of biblical account is God's covenant after the big flood and a continuation of God's deliverance done through Noah's ark for those obedient to His will. The Noah's ark also housed and saved the male and female of every species with which to renew life. This is our contemporary Noah's ark moment when we give glory to God for saving His obedient children and for protecting and upholding the male and female union of every species to renew and sustain life.

Below is a brief explanation of the logo that you see above which was designed by one of our Courage brothers.

a. Male and female icons in place and they are united in Christ and the Divine Mercy watches over them. The rays can actually be seen as like a light from a lighthouse too guiding the ark's navigation.

b. The cross is gold which is the true treasure of the Church.

c. Background is sky blue which is Marian. But the one below is gray which is the flood and the challenges that face the ark.

d. Outer ring is maroon which is the color of Courage. Interestingly enough, this can also be crimson which is what the claws of the dove became when it came back to Noah after checking if there's already dry land.

Please feel free to forward this beautiful prayer to everyone you know. You can download a soft copy of this prayer by right clicking on the image above and click 'Save As' or you can send me an e-mail at couragemanila@yahoo.com if you want to receive the original soft copy. Thank you.

Posted by Courage Philippines at 12:05 AM

Email ThisBlogThis!Share to TwitterShare to FacebookShare to Pinterest
Labels: prayer