To Kneel or to Stand 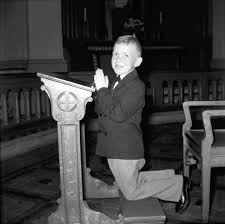 It seems that most of the faithful Catholics attending Mass are not yet aware or have been made aware by their local parish priests and/or bishops about the practice of kneeling during the entire Eucharistic consecration of the Mass. I attended Mass today and only saw two ladies kneeling after the Holy, Holy, Holy (Sanctus) part up until the grand Amen or right before the Our Father. I myself have only very recently learned that this should be the proper way to do it and rightfully so because this is the part of the Mass when the Transfiguration happens and the Lord deserves utmost reverence no less. Please see letter below from CBCP for a full and detailed explanation.

Your Eminences and Excellencies,

So, at the March 15, 2016 meeting of the CBCP Permanent Council one of the issues discussed was this issue on the posture of standing after the consecration and to keep standing or of kneeling after the Sanctus until after the Amen of the Eucharistic Prayer. This is the reason for this letter.

Before the 1990s, we can still recall that we had the established practice of kneeling after the Sanctus until after the Amen of the Eucharistic Prayer.

In the 1990s the practice of standing after the consecration was begun. This change in the established practice was based on the 1990 Guidelines for the Eucharist which were approved by the CBCP in January 1990. Number 3 of the 1990 Guidelines states: “The people should kneel from the Sanctus until the end of the Eucharistic Prayer…. If the acclamation after the consecration is sung, the people may stand for it and keep standing.”

However, in reality the practice became always standing after the consecration until the Amen.

In both instances, the 1990 Guidelines for the Eucharist and the proposed Philippine Adaptations to the General Instructions of the Roman Missal 2002, no recognition was ever received from Rome.

Specifically for the Philippine Adaptations to the General Instructions of the Roman Missal 2002 that were submitted to Rome, no answer was ever received. Archbishop Romulo Valles, during an ad limina visit in September 2003, made a follow up at the office of the Congregation for Divine Worship and the Discipline of the Sacraments on the status the Philippine proposed adaptations. After that, until up to now we have not received a formal written reply.

In February 2016, Bishop Julius Tonel, Chairman of the Episcopal Commission on Liturgy, made a query with the Secretary of the Congregation for Divine Worship and the Discipline of the Sacraments about this specific proposed adaptation. In reply to his query, it was confirmed that a formal reply or recognition had never been given.

With the above information, we sought the advice of some of our bishops knowledgeable in the Code of Canon Law. They have responded that no answer or silence from Rome means that the recognition has not been given. Without the recognition the CBCP does not have the authority to make or implement any such adaptation. This being the case, we have to revert to the established practice before the request.

To go back to our established practice is very much in keeping with our current General Instructions of the Roman Missal, approved by the CBCP and given the needed recognition from Rome, published in the Philippine Edition of the Roman Missal of 2011. Number 43 states: “Where it is the practice for the people to remain kneeling after the Sanctus until the end of the Eucharistic Prayer …, it is laudable for this practice to be retained.”

Another way of saying this is that we go back our established practice where the people kneel beginning after the Sanctus and remain kneeling until after the Amen of the Eucharistic Prayer knowing that this is in harmony with the present GIRM.

You are kindly requested to inform our clergy and Catholic faithful about this re-statement of position and lead them, through liturgical catechesis, to deepen our reverence for the Most Blessed Sacrament. The spirit of the law is to observe greater reverence for the Real Presence.

We remind you of some lines contained in our Pastoral Exhortation to Open the 2016 Year of the Eucharist and the Family:

Kneeling is part of our Christian culture. We cannot abandon or set aside the culture of kneeling in favor of the culture that says as freemen we must face God on our feet. Bending the knee before the tabernacle in genuflection, kneeling down at the celebration of the Eucharist, kneeling down to adore the exposed Blessed Sacrament— these are little but sublime acts of adoration that we must preserve and protect.

Posted by Courage Philippines at 11:10 PM