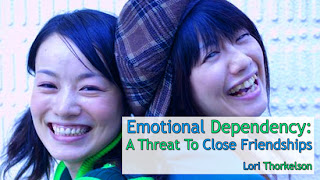 Note: After attending a talk on emotional dependency yesterday given by a brother in the community, I decided to feature a 3-part series of article on ED (emotional dependency) based on the book of Lori Rentzel. This will give an overview of ED, the dynamics involved, and a suggested plan of action to help the struggler overcome this major roadblock in attaining wholeness and healing in relationships.

“Above all else, guard your heart, for it is the wellspring of life.” - Proverbs 4:23

Throughout the years, we’ve realized that one of the most intense struggles people encounter is the problem of emotional dependency. Emotional dependency can range from a powerful romantic attachment to another person to a platonic friendship that has become too ingrown and possessive. Part 1 defines the problem and looks at some of the set-ups that lead to dependent relationships.

Mary had spent long hours with Sarah, counseling her and helping her through the struggles of being a new Christian. They seemed to have a great friendship with lots of common interests and a mutual love for the Lord. Sarah felt Mary understood her better than anyone ever had. Even Sarah’s husband, Bill, couldn’t provide her with the closeness she experienced with Mary. Mary and her husband, Tom, had a fulfilling marriage, but Tom’s sales career kept him away from home often. A loving person, Mary willingly invested her time and caring in Sarah, who really seemed to need her. It was rewarding for Mary to see Sarah growing the Lord, and she enjoyed Sarah’s obvious admiration.

The shock came when Mary and Sarah found themselves emotionally and physically involved with each other. Neither woman had ever been aware of homosexual feelings before. Both of them loved God and cared for their husbands. Their friendship had appeared to be Christ-centred, as they frequently prayed and read the Bible together. If what they were doing was wrong, why hadn’t God stopped them? Why hadn’t they seen the danger signals along the way? Now that they were so closely involved, they couldn’t imagine being apart. “What are we going to do?”, they wondered.

What Is Emotional Dependency?

Long before Mary and Sarah were involved homosexually, they’d entered into an emotionally dependent relationship. Emotional dependency, as we’ve defined it, is:

the condition resulting when the on-going presence and/or nurturing of another is believed necessary for personal security. This nurturing comes in many different forms of input from one person’s life into another:

Characteristics of a Dependent Relationship.

We all have a deep need, placed in us by God, for intimate friendships. How do we know when we’re meeting this need legitimately? Is there some way to recognize when we’ve crossed the line into dependency? Here are some signs that an emotional dependency has started:

When either party in a relationship:

experiences frequent jealously, possessiveness and a desire for exclusivism, viewing other people as a threat to the relationship.
prefers to spend time alone with this friend and becomes frustrated when this doesn’t happen.
becomes irrationally angry or depressed when this friend withdraws slightly.
loses interest in friendships other than this one.
experiences romantic or sexual feelings leading to fantasy about this person.
becomes preoccupied with this person’s appearance, personality, problems and interests.
is unwilling to make short or long range plans that don’t include the other person,
is unable to see the other’s faults realistically.
becomes defensive about the relationship when asked about it.
displays physical affection beyond that which is appropriate for a friendship.
refers frequently to the other in conversation; feels free to “speak for” the other.
exhibits an intimacy and familiarity with this friend that causes others to feel uncomfortable or embarrassed in their presence.

How Does a Dependent Relationship Differ from a Healthy Friendship?

A healthy relationship is free and generous. Both friends are eager to include others in their activities. They experience joy when one friend hits it off with another. In a good friendship, we desire to see our friend reach his or her full potential, developing new interests and skills. A dependent relationship is ingrown, creating mutual stagnation and limiting personal growth. In normal relationships, we are affected by things our friends say and do, but our reactions are balanced. When we’re emotionally dependent, a casual remark from our friend can send us into the heights of ecstasy or the pits of grief. If a close friend moves away, it is normal for us to feel sorrow and a sense of loss. If one of the partners in a dependent relationship moves, the other is gripped with anguish, panic and desperation. A healthy friendship is joyful, healing, and upbuilding; an emotional dependency produces bondage.

Emotional dependency comes as a surprise to most people. Like Mary and Sarah, they don’t see the problem coming until it has hold of them. However, dependencies don’t happen in a vacuum. Definite elements in our personalities and situations can set us up for binding relationships. Sins and hurts from the past leave us vulnerable, too. Having an awareness of these set-ups helps us to know when we need to exercise special caution in our relationships.

Personality Set-ups: Who Is Susceptible?

Anyone can fall into a dependent relationship given the right pressures and circumstances. However, there are a few common personality patterns that consistently gravitate towards each other to form dependencies. The basic combination seems to be the individual who appears to “have it all together” teamed up with one who needs the attention, protection or strength the other offers. Variations on this theme include:

Although these pairs appear to include one strong person and one needy person, they actually consist of two needy people. The “strong” one usually has a deep need to be needed. As often as not, the one who appears weaker actually controls the relationship. We’ve talked with people who have been “weak” in one relationship and “strong” in another, and sometimes these elements aren’t apparent at all. A balanced friendship can turn into a dependent relationship if other set-ups are present.

Situational Set-ups: When Are We Most Vulnerable?

Certain times in our lives find us feeling insecure, ready to grasp hold of whatever security is available to us. Some of these times include:

We’re also vulnerable during times of boredom or depression. The best way to avoid trouble is to recognize our need for special support during these times and plan ahead for these needs to be met in healthy ways. These might include sharing our burdens with a small prayer group, scheduling a series of appointments with a counsellor or pastor, increasing our contact with family members and most important, cultivating our relationship with Jesus through special quiet times. Also, there’s nothing wrong with letting our friends know we need their support! Problems only develop when we lean too much on one particular friend to meet all our needs.

Roots: Why Are We Prone to Dependency?

In a dependent relationship, one or both people are looking to a person to meet their basic needs for love and security, rather than to Jesus. Unless underlying spiritual and emotional problems are resolved, this pattern will continue unbroken. Typical root problems that promote dependency include:

covetousness, which is desiring to possess something (or someone) God has not given us
idolatry, which results when a person or thing is at the centre of our lives rather than Christ.
rebellion, which is refusing to surrender areas of our lives to God, and
mistrust, failing to believe God will meet our needs if we do things His way.
Sometimes hurts from our past leave us with low self-esteem, feelings of rejection and a deep unmet need for love. Bitterness or resentment toward those who have hurt us also open us up for wrong relationships. These sins and hurts need to be confessed and healed before real freedom can be experienced. This can happen through confession and prayer, both in our personal times with the Lord and with other members of the body of Christ.

Emotional dependency is a painful thing to discuss. Most of us have experienced this problem. None of us are exempt from the temptation to draw our life and security from another person, especially when that person is handy and cooperative. Dependent relationships can form in opposite and same sex friendships. They can happen between married couples and between parents and children. But in the heart of the Gospel, there’s a message of truth that can free us from self-seeking relationships. For a lot of us, that really is good news!

Posted by Courage Philippines at 4:20 PM