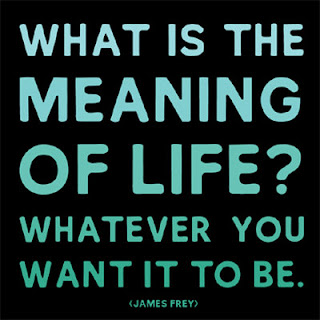 
What differentiates man from animals is the ability to look forward to tomorrow and to look beyond the externals. While man can see beauty in a flower and think of either God or a loved person and even of love itself, a beast will stop short at seeing the flower as something good to eat or not.

What makes man worthy of the same name is his capacity to see beyond the here and now and to perceive meanings.

In his book Man’s Search for Meaning, Viktor Frankl describes his experiences at the Nazi concentration camp where he was detained during World War II. In detention the prisoners were stripped of everything that made them experience personal worth: name, respect, profession, family, knowledge, wealth, etc. He noted that some of the prisoners gave up surviving when everything that made them feel important was taken away. Others got crazy and behaved even worse than beasts, capable of killing another person for a loaf of stale bread or a rotting potato.

And finally, he noted that those who had something or someone considered more precious than their own lives never lost their will to live even as they were not afraid to either suffer or die. From this experience, Viktor Frankl concluded that man’s life and even just his survival is determined by what meanings he perceives and chooses to live and die for.

How a person discovers what meaning to give his life is a story of both the environment he lives in and the choice he makes. What counts is what values in life he discovers and ultimately makes his own. “Where your treasure is, there also will your heart be” (Mt 6:21).

One of the most trying things about being young is that of being in a stage where one has to choose what values to live and die for. Human society is full of models and examples of persons who have embraced their own values. If there are rock stars and actors and actresses making it to the limelight and to wealth, there are also those who, like Francis of Assisi of long ago, leave behind them a life of ease and comfort to pursue ideals of nobility and service. And what is awful is that today’s young person is left alone to choose.

To discover which model one has to choose, one need not look beyond or outside himself. Instead, one should look into his heart. If he does, he will surely discover passions and drives that are either constructive or destructive: his capacity to love or hate, to give or possess, to build or destroy, to forgive or avenge. When he chooses what is positive and shuns what is negative, he will naturally discover what model or example to embrace. And there he will discover the meaning in his life.
Posted by Courage Philippines at 12:27 AM