The Song of Joseph 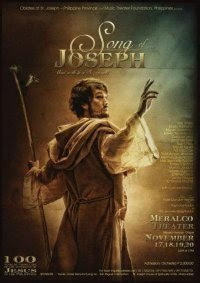 The Song of Joseph is a view, up close and personal, joyful and celebratory, of St. Joseph's life, love, and death by way of a musical, probably the first and only one woven around this low-profile saint. The two hour musical-theater piece, mounted with a cast of 17 characters and a staff of 10 is produced as part of the preparation towards the run-up to the centennial celebration of the Oblates of St. Joseph's presence in the Philippines in 2015.

At least 33 all-original songs are featured in the musical, taking on the personality of a Broadway play. The cast is led by classically trained singer Jon Joven (of Miss Saigon fame) as Joseph, Tricia Amper Jimenez and Arlynne Lupas Tecson as Mary, and Miguel Aguila as Jesus.

The musical will have a limited return run in Manila on March 7, 3 p.m. at the Main Theater of the Cultural Center of the Philippines. On March 20 and 21, the play moves to De La Salle College in Lipa City, followed by a tour of the Visayas.

(Credits: Panorama Magazine)
Posted by Courage Philippines at 12:04 AM