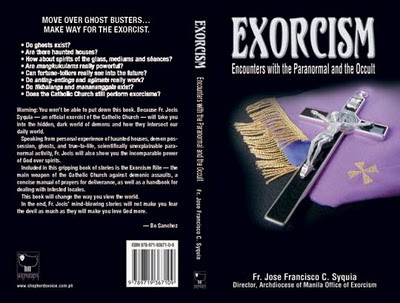 I just bought a book on exorcism last week for P300. It is entitled Exorcism: Encounters with the Paranormal and the Occult (second edition) written by Fr. Jose Francisco C. Syquia, Director of Archdiocese of Manila Office of Exorcism (see photo above). This is related to my previous post on spiritual warfare entitled, Deliver Us From Evil.

I. The Church and the Devil

IV. The Secrets of the New Age Movement: Notebook 1

V. The Secrets of the New Age Movement: Notebook 2

VII. Ministering to Those Under Extraordinary Demonic Assault

VIII. Confrontation between God and the Devil

IX. The Catholic in the Midst of Love and War

X. The Scars of Battle

Conclusion: Only Jesus and Always Jesus

Appendix C: A Concise Handbook on Exorcism and Deliverance

Appendix E: How to Handle an Emergency Case of Grave Oppression and Possession

Appendix F: Rules from the Roman Ritual of Exorcism


What Others Say About the Book:

"I opened the book out of curiosity. Reading it enriched me theologically and widened my pastoral outlook. I encourage my fellow pastors of souls to read this book." - Most Rev. Socrates Villegas, D.D., Bishop of Balanga

"Speaking from personal experience of haunted houses, demon possession, ghosts, and true-to-life, scientifically unexplainable paranormal activity, Fr. Jocis will show you the incomparable power of God over spirits. In the end, his mind-blowing stories will not make you fear the devil as much as they will make you love God more." - Bo Sanchez, Catholic Lay Preacher and Bestselling Author

"For those who take their interior life seriously and desire to fully advance their prayer life, the experience of battling with the common enemies which are the world, the flesh, and the devil is ordinary, daily fare. Your book helps in shedding light on the nature of this spiritual warfare." - Sr. Mary Bernard Cam, OCD, Mother Prioress Carmelite Monastery of St. Therese


My Experiences of the Paranormal

Growing up I have had my share of the paranormal. I still remember being brought to an "albularyo" many times as a kid when doctors couldn't pinpoint the source of my physical maladies or whenever I experience some unexplainable sickness. This "albularyo" handles cases such as those who are "nakulam", "nabarang", "na-dwende", "na-engkanto" and "nasapian". He uses another person as a medium where he can communicate directly to the spirits. I also used to wear some sort of "anting-anting" called "dignum" before to protect me from these evil attacks.

Not only did I get exposed to the occult, I also got drawn to some forms of New Age practices out of ignorance most notably horoscopes, Silva mind control program, feng shui, lucky charms and prosperity bracelets, crystals, and even a book on how to make "gayumas"! I also remember reading some New Age literature and novels such as the vampire chronicles of Anne Rice (Thank God she is now a Catholic convert), Harry Potter books, and writings of Jimmy Licauco (a well-known parapsychologist). My main motivation for engaging in these activities was basically to find a short-cut in achieving prosperity and happiness in life, believing somehow that through some unknown mysterious forces in the universe that I can manipulate I would be able to attract it by wearing this or that, rearranging the furnitures at home so that everything is aligned and in harmony with the cosmic energy that make up for a balanced "chi", or descending to the "alpha" state of mind in order for my visualizations to become a reality in the physical plane.

But of course the Lord is continuously renewing me and I have given up subscribing to all these New Age nonsense. As difficult as it can be at times, I now place my entire trust and confidence in God's providence. No more baguas, beckoning cat, frog figurine with a golden coin, wind chimes, lucky charms and bracelets, etc.


Against the First Commandment

The Catechism of the Catholic Church clearly states the following precepts with regards to divination and magic (CCC 2115-2117):

God can reveal the future to his prophets or to other saints. Still, a sound Christian attitude consists in putting oneself confidently into the hands of Providence for whatever concerns the future, and giving up all unhealthy curiosity about it. Improvidence, however, can constitute a lack of responsibility.

All forms of divination are to be rejected: recourse to Satan or demons, conjuring up the dead or other practices falsely supposed to "unveil" the future, consulting horoscopes, astrology, palm reading, interpretation of omens and lots, the phenomena of clairvoyance, and recourse to mediums all conceal a desire for power over time, history, and, in the last analysis, other human beings, as well as a wish to conciliate hidden powers. They contradict the honor, respect, and loving fear that we owe to God alone.

All practices of magic or sorcery, by which one attempts to tame occult powers, so as to place them at one's service and have a supernatural power over others - even if this were for the sake of restoring their health - are gravely contrary to the virtue of religion. These practices are even more to be condemned when accompanied by the intention of harming someone, or when they have recourse to the intervention of demons. Wearing charms is also reprehensible. Spiritism often implies divination or magical practices; the Church for her part warns the faithful against it. Recourse to so-called traditional cures does not justify either the invocation of evil powers or the exploitation of another's credulity.


"For the time will come when people will not tolerate sound doctrine but, following their own desires and insatiable curiosity, will accumulate teachers and will stop listening to the truth and will be diverted to myths." - 2 Timothy 4:3-4
Posted by Courage Philippines at 12:36 AM

Email ThisBlogThis!Share to TwitterShare to FacebookShare to Pinterest
Labels: books