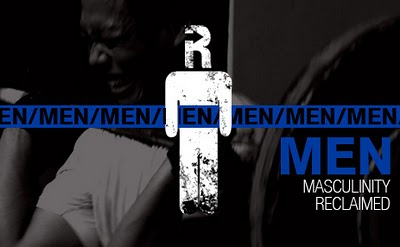 Some thoughts from Boysen Hodgson on true masculinity from The ManKind Project website. I hope to find the book Crisis in Masculinity by Leanne Payne one of these days. My spiritual director recommended it to me so it really must be a good book.

He cleans up after himself.
He cleans up the planet.
He is a role model for young men.
He is rigorously honest and fiercely optimistic.

He's let go of childish shame.
He feels guilty when he's done something wrong.
He is kind to men, kind to women, kind to children.
He teaches others how to be kind.
He says he's sorry.

He's not afraid to get dirty.
He's ready to confront his own limitations.
He has high expectations for himself and for those he connects with.
He looks for ways to serve others.
He knows he is an individual.
He knows that we are all one.
He knows he is an animal and a part of nature.
He knows his spirit and his connection to something greater.

He knows that the future generations are watching his actions.
He builds communities where people are respected and valued.
He takes responsibility for himself and is also willing to be his brother's keeper.

He knows his higher purpose.
He loves with fierceness.
He laughs with abandon, because he gets the joke.
Posted by Courage Philippines at 12:29 AM

Email ThisBlogThis!Share to TwitterShare to FacebookShare to Pinterest
Labels: masculinity