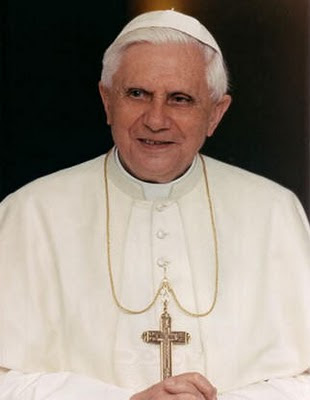 Just a day after the controversial papal statement was published in the secular media I feel compelled to present this issue from its proper Christian perspective. It was not surprising at all to find people who are supportive of the RH bill using this as a sign that the Church is finally "catching up with the times." I know these people will do everything to suit their own agenda. Although the papal pronouncement regarding condom use only deals specifically with preventing infections, some people are applying this to preventing pregnancy. It is sad to note how some people in the media intentionally mislead others with their bad journalistic ethics.

I will be publishing here a series of articles taken directly from the Zenit website, which is my trusty source of reliable and accurate reportage of Church events. In my observation, Pope Benedict XVI's statements can oftentimes be hard to grasp by an ordinary person of average intellect. In a sense this is where most of the misunderstandings and misconceptions begin. Many of us are not living in the grace of the Holy Spirit and are deprived of His gifts of wisdom and understanding. Thus, there is often a need of an intermediary so to speak to explain things for us so that we may come to understand.


Benedict XVI, Condoms, and the Light of the World

DETROIT, NOV. 21, 2010 (Zenit.org).- A book-length interview with Benedict XVI, due to be released on Tuesday, is already causing controversy in the public spotlight due to the Pope's comments on the use of condoms.

Some quotes from the book, "Light of the World" (Ignatius Press), were published ahead of the release date, prompting media opinions and a statement of clarification by Father Federico Lombardi, director of the Vatican press office.

Janet Smith, a consultor to the Pontifical Council on the Family who holds the Father Michael J. McGivney Chair of Life Ethics at Sacred Heart Major Seminary in Detroit, and has published extensively on the topics of sexuality and bioethics, explained in this interview the source of the controversy and what the Pope is really saying.

She noted that in the book (p.119), to the charge that "It is madness to forbid a high-risk population to use condoms," Pope Benedict replied (This paragraph is at the end of an extended answer on the help the Church is giving the AIDS victims and the need to fight the banalization of sexuality.):

"There may be a basis in the case of some individuals, as perhaps when a male prostitute uses a condom, where this can be a first step in the direction of a moralization, a first assumption of responsibility, on the way toward recovering an awareness that not everything is allowed and that one cannot do whatever one wants. But it is not really the way to deal with the evil of HIV infection. That can really lie only in a humanization of sexuality."

The interviewer asked the Pontiff, "Are you saying, then, that the Catholic Church is actually not opposed in principle to the use of condoms?"

The Holy Father replied, "She of course does not regard it as a real or moral solution, but, in this or that case, there can be nonetheless, in the intention of reducing the risk of infection, a first step in a movement toward a different way, a more human way, of living sexuality."

Smith explains in the following interview, which she sent to ZENIT, how Benedict XVI was advocating conversion, not condoms, in the striving for moral behavior.

Q: What is Pope Benedict saying?

Smith: We must note that the example that Pope Benedict gives for the use of a condom is a male prostitute; thus, it is reasonable to assume that he is referring to a male prostitute engaged in homosexual acts.

The Holy Father is simply observing that for some homosexual prostitutes the use of a condom may indicate an awakening of a moral sense; an awakening that sexual pleasure is not the highest value, but that we must take care that we harm no one with our choices.

He is not speaking to the morality of the use of a condom, but to something that may be true about the psychological state of those who use them. If such individuals are using condoms to avoid harming another, they may eventually realize that sexual acts between members of the same sex are inherently harmful since they are not in accord with human nature.

The Holy Father does not in any way think the use of condoms is a part of the solution to reducing the risk of AIDS. As he explicitly states, the true solution involves "humanizing sexuality."

Anyone having sex that threatens to transmit HIV needs to grow in moral discernment. This is why Benedict focused on a "first step" in moral growth.

The Church is always going to be focused on moving people away from immoral acts towards love of Jesus, virtue, and holiness. We can say that the Holy Father clearly did not want to make a point about condoms, but wants to talk about growth in a moral sense, which should be a growth towards Jesus.

Q: So is the Holy Father saying it is morally good for male prostitutes to use condoms?

Smith: The Holy Father is not articulating a teaching of the Church about whether or not the use of a condom reduces the amount of evil in a homosexual sexual act that threatens to transmit HIV.

The Church has no formal teaching about how to reduce the evil of intrinsically immoral action. We must note that what is intrinsically wrong in a homosexual sexual act in which a condom is used is not the moral wrong of contraception but the homosexual act itself.

But the Holy Father is not making a point about whether the use of a condom is contraceptive or even whether it reduces the evil of a homosexual sexual act; again, he is speaking about the psychological state of some who might use condoms. The intention behind the use of the condom (the desire not to harm another) may indicate some growth in a sense of moral responsibility. In "Familiaris Consortio (On the Role of the Christian Family in the Modern World)," John Paul II spoke of the need for conversion, which often proceeds by gradual steps:

"To the injustice originating from sin ... we must all set ourselves in opposition through a conversion of mind and heart, following Christ Crucified by denying our own selfishness: such a conversion cannot fail to have a beneficial and renewing influence even on the structures of society.

"What is needed is a continuous, permanent conversion which, while requiring an interior detachment from every evil and an adherence to good in its fullness, is brought about concretely in steps which lead us ever forward. Thus a dynamic process develops, one which advances gradually with the progressive integration of the gifts of God and the demands of His definitive and absolute love in the entire personal and social life of man. (9)"

Christ himself, of course, called for a turning away from sin. That is what the Holy Father is advocating here; not a turn towards condoms. Conversion, not condoms!

Q: Would it be proper to conclude that the Holy Father would support the distribution of condoms to male prostitutes?

Smith: Nothing he says here indicates that he would. Public programs of distribution of condoms run the risk of conveying approval for homosexual sexual acts.

Q: Is Pope Benedict indicating that heterosexuals who have HIV could reduce the wrongness of their acts by using condoms?

Smith: No. In his second answer he says that the Church does not find condoms to be a "real or moral solution." That means the Church does not find condoms either to be moral or an effective way of fighting the transmission of HIV. As the Holy Father indicates in his fuller answer, the most effective portion of programs designed to reduce the transmission of HIV are calls to abstinence and fidelity.

The Holy Father, again, is saying that the intention to reduce the transmission of any infection is a "first step" in a movement towards a more human way of living sexuality. That more human way would be to do nothing that threatens to harm one's sexual partner, who should be one's beloved spouse. For an individual with HIV to have sexual intercourse with or without a condom is to risk transmitting a lethal disease.

An analogy: If someone was going to rob a bank and was determined to use a gun, it would better for that person to use a gun that had no bullets in it. It would reduce the likelihood of fatal injuries. But it is not the task of the Church to instruct potential bank robbers how to rob banks more safely and certainly not the task of the Church to support programs of providing potential bank robbers with guns that could not use bullets.

Nonetheless, the intent of a bank robber to rob a bank in a way that is safer for the employees and customers of the bank may indicate an element of moral responsibility that could be a step towards eventual understanding of the immorality of bank robbing.

(more articles to follow)
Posted by Courage Philippines at 9:58 AM