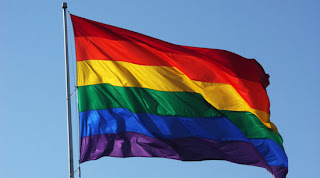 H/T to Bro. R for this well-researched article.

- The Greeks looked at men as perfect human beings and women less than perfect. Because of this, homosexuality was openly accepted between mentor and mentee and among warriors who engaged in back-to-back combat.

- Female poet Sappho, who lived in the island of Lesbos, wrote poems about woman-to-woman love. The word "lesbian" came from the island Lesbos. Sappho became the inspiration of Sapphic (lesbian) societies.

- Middle Ages: Sex aberration was considered a heresy, so homosexuality was punishable by death via stoning or being burned at the stakes (being burned alive).

- Hitler and the Nazis persecuted homosexuals. The hard-core Nazis are now said to be closeted gays.

- 1948, 1953: The Kinsey Reports on human sexual behavior were released saying, among other things, that 10% of the population was gay.

- 1950s: The gay and lesbian movement was born via the leftist Mattachine Society (gays) in 1950 (USA, using the cell organization of the Communist Party as model) and the Daughters of Bilitis (lesbians) in 1955 (in San Francisco, USA). Their manifesto: 1) To lift homosexuals from being persecuted citizens to respectable citizens, 2) To decriminalize homosexuality, 3) To encourage gays’ full participation in society. Statements: 1) Homosexuality is not an illness. 2) Homosexuals must be in solidarity and on equal terms with the heterosexual world. 3) Homosexuals must use aggressive tactics to advance their views.

- June 28, 1969: The Stonewall rebellion was staged in New York City, where gays fought back for three nights when the police attacked their gathering place. The gays realized that, if they banded together, they would win and gain moral victory.

- 1970s: The term "gay" emerged. A "gay" person is defined as a homosexual. Gayness means an alternative and equal sexual preference with respect to heterosexuality or normal sexuality. The real definition of gayness, however, is that it is a sociopolitical construct/creation referring to chosen self-identity and lifestyle.

- The first Gay Pride Parade was inspired by Stonewall. Also called Christopher Street Day, appropriating the name of the street in which the gay watering hole Stonewall Inn was located.

- Rebuttals: But experiments to prove any of these are unreplicated. Attempts to reproduce the results had either inconsistent or opposite results. Moreover, the researchers had gay bias: either they were gay or gay sympathizers. Methods used were defective, flawed. The real cause of homosexuality is environmental (early-life traumas), not genetic.

- How to deal with homosexuality, according to gays: Letting go through sexual promiscuity and monogamous relationship (which may either mean one to one or one at a time).

- 1993: The Gay Rights March to Washington D.C. was held to press the US Congress to pass the gay rights bill asking special rights for gays. This move was inspired by the historic Martin Luther King freedom speech; the comparison was said to be grossly unfair. About 300,000 marched to Washington, an event funded by a government organization.

- The documentary "Inside the Homosexual Agenda" was released. The documentary talks about, inter alia, the impact of passing the same-sex marriage law on business/employment, school/education, church, etc.

- Quote: “18% of homosexuals have sex with young people.”

- Quote: “The unrealistic understanding of homosexual rights had led to the Gay Agenda.”

- The Gay Agenda comprises of/consists in: Indoctrination to gay identity. Political and social acceptance of gayness and the gay lifestyle. Erosion of freedom to publicly dispute the Gay Agenda.

- 1967: The progay magazine The Advocate was launched in the United States. Other titles followed long after. July 1976: The widely read Christopher Street was also launched, capitalizing on the historic significance of the street.

- "After the Ball" was launched as a pro-gay bible detailing the dirty tactics in ensuring a thoroughly homosexualized society, especially through the neoliberal media as funded by wealthy homosexual patrons.

- The American Medical Association (AMA, not APA) still lists homosexuality as a sexual disorder, together with pedophilia and other 'paraphilias.'

- The website and research group National Association for Research and Therapy of Homosexuality (NARTH) was born. http://narth.com/

- The website and support group People Can Change was born. http://www.peoplecanchange.com/

- Vatican City, through the American psychologist-priest Fr. James Harvey, established Courage International based in the USA, originally to help address problem priests with same-sex concerns. Courage eventually evolved into a support group for lay people with the same problem. It uses the Alcoholics Anonymous' 12-Step program to deal with the homosexual condition.

- In the University of the Philippines, students Danton Remoto, Venir Turla Cuyco, and Neil Garcia found the UP Babaylan, a gay grouup. A series of books on the gay lifestyle was published by them in the ensuing years.

- Ateneo established the Center for Gender Studies (?), with Remoto at the helm. (data for further confirmation). Progay beliefs may have infiltrated the Catholic Church through pro-gay lifestyle counselors, therapists, psychologists, and even priests.

2003: Joseph Cardinal Ratzinger of the Congregation for the Doctrine of the Faith wrote the "Considerations regarding Proposals to Give Legal Recognition to Unions Between Homosexual Persons." http://www.vatican.va/roman_curia/congregations/cfaith/documents/rc_con_cfaith_doc_20030731_homosexual-unions_en.html

- Present: Legalization of same-sex marriage being pushed around the world by progay interest groups. Canada, Spain, Belgium, among other countries, are now same-sex havens. This is consistently opposed by local Catholic clergy.

- In the Philippines, the Anti-Gender Discrimination Bill was passed in the 12th Congress, but wasn’t tackled in the Senate. It’s back to square one in the 13th Congress for the progay lobby group Ladlad, both in Senate and Congress. Another progay group, a broad coalition, was founded, called LAGABLAB or the Lesbian and Gay Legislative Advocacy Network. In Davao, a group is pushing for the gay agenda in the form of a local ordinance. A Christian sect in Baguio City, the Metropolitan Community Church, led by Rev. Ceejay Agbayani, held a mass wedding, with local Catholic clergy vehemently protesting. Another such group in existence is called The Order of St. Aeldred. Both groups are not recognized by the Catholic Church, although they use Catholic rites.

- 2011: Extreme response (legislation of death just for being gay) against gays in Uganda hogged the headlines and shocked the world, especially the gay communities. The Catholic Bishops Conference of the Philippines launched a local edition of Fr. Harvey's book, Homosexuality and the Catholic Church. The Canadian Conference of Catholic Bishops releases the pastoral guideline, "Pastoral Ministry to Young People with Same-Sex Attraction." The United Nations enshrined "gay rights" as basic human rights. The New York Senate voted for gay marriage, making New York the sixth state to legalize same-sex marriage in the USA.