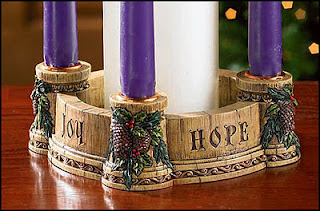 Reflections from our annual Courage recollection in Anawim.


Pope Benedict XVI released his new encyclical letter, "On Christian Hope," Nov. 30, just two days before the beginning of Advent. Not surprisingly, the Holy Father's timing was perfect because Advent, more than any other season of the year, is rooted in the virtue of hope.

For Catholics, the real new year begins not on January 1, but on the First Sunday of Advent, the day when the Church begins her annual new cycle of Scripture readings and worship. The season of Advent, deriving from the Latin verb advenire, meaning "to come" or "to arrive," has a two-fold purpose: first, to remind us of the birth of Jesus in Bethlehem and all that it implied for the salvation of the world; and second, to ready us for Christ's Second Coming at the end of time as King and Judge of creation. Like Lent, Advent is a time of preparation. Also like Lent, Advent is a penitential season - but not in the same strict way. Rather, Advent embodies the words of the liturgy, which remind us that "we wait in joyful hope for the coming of our savior, Jesus Christ."

Benedict's new encyclical is a rich and challenging document. It's not easily absorbed in one reading. But one of its most important lines can be found right in the opening sentences. The Holy Father reminds us that for Christians, the virtue of hope enables us to face the burdens of daily life, no matter how heavy. He writes that "the present, even if it is arduous, can be lived and accepted if it leads towards a goal, if we can be sure of this goal, and if this goal is great enough to justify the effort of the journey" (1). Faith in Jesus Christ leads us to hope for eternal life. Christ's life gives our lives meaning. If we really believe in Jesus Christ, we will have confidence in the future, no matter how bleak some days or some problems seem. For in the end, Jesus has already won our salvation and the happiness that comes with it.

The source of the word "virtue" is revealing; it comes from the Latin noun virtus, meaning "strength." The virtue that Christians call hope is not a warm feeling, or a sunny mood, or a habit of optimism. Optimism, as the great Catholic novelist Georges Bernanos once wrote, has nothing to do with hope. Optimism is often foolish and naive - a preference to see good where the evidence is undeniably bad. In fact, Bernanos called optimism a "sly form of selfishness, a method of isolating oneself from the unhappiness of others."

Hope is a very different creature. It's a choice; a self-imposed discipline to trust in God while judging ourselves and the world with unblinkered, unsentimental clarity. In effect, it's a form of self-mastery inspired and reinforced by God's grace. "The highest form of hope," Georges Barnanos said, "is despair, overcome." Jesus Christ was born in a filthy stable and died brutally on a cross not to make a good world even better; but to save a fallen and broken world from itself at the cost of his own blood. Such is the real world; our daily world; the world of Christian hope - the world that Pope Benedict speaks to when he writes in his new encyclical that "all serious and upright human conduct is hope in action" (35) and "the true measure of humanity is [determined by our] relationship to suffering and to the sufferer" (38).

In the words of Benedict: "To suffer with the other and for others; to suffer for the sake of truth and justice; to suffer out of love, and in order to become a person who truly loves - these are fundamental elements of humanity, and to abandon them would destroy man himself" (39).

As we ready ourselves for the joy of Christmas this year, let's live Advent well and remember why we're supposed to be joyful. In the end, Christmas is not about gifts or carols or parties, though all these things are wonderful in their place. Christmas is about the birth of Jesus Christ, who brings meaning and hope to a world that needs redemption. In Him, and only in Him, is our hope.
Posted by Courage Philippines at 12:01 AM