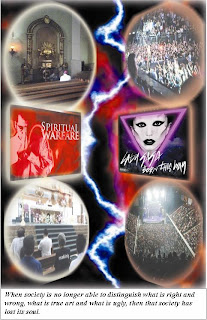 What can we learn about the moral state of our nation from the recent Lady Gaga concert? Anthony Perez of Pro-Life Philippines exposes the elephant in the room that is slowly eroding the moral fabric of our society.
W
e have spent the past few days trying to inform and educate everyone on who Lady Gaga is, what her shows and songs are all about, and why the supposedly sold-out concerts should not push through. In the end, it was Lady Gaga who exposed our nation and gave us a picture of something we knew all along but was just too proud to admit: that we may have the trappings of a largely Christian nation, but deep inside, we are falling apart. Like a majestic Church from the outside, but inside are cracks on the walls and columns.

In the past two articles I have mentioned something about the venom spewed out by church-haters and liberals against us who uphold what is true and just.

Below are but some of the comments which I got from a popular social networking site, on one of the pages that report the news: 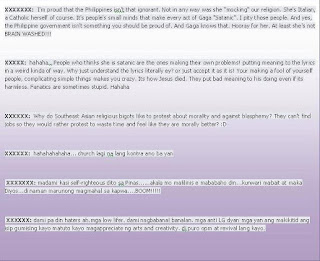 Perhaps the most difficult question I had to answer in the midst of this controversy was: What is wrong with Lady Gaga?

What is wrong with Lady Gaga?

For many of us Pro-Lifers, the question is a simple one. It’s so simple and so basic that it’s that hard to explain. It’s like explaining to someone how to breathe.

When society is no longer able to distinguish what is right and wrong, what is true art and what is ugly, then that society has lost its soul.

At the end of the day, long after Gaga has left the country and the issue has died down, we are still faced with a problem that goes beyond Gaga and her supporters: a society that has turned away from God and its inherited values to embrace moral relativism, while the rest who still call themselves devout Catholics and Christians are, for the larger part, are deep in the slumber of indifference.

Why is there a prevalence of indifference and hostility towards religion and the Church, even from within? There could be a lot of reasons, but let me cite one: the failure of parents and our Catholic schools to pass on the faith to our children.

That, and not Lady Gaga, is the real problem we should address from now on. If we are successful in doing so, a thousand Gagas may come to the country and she will be hard-pressed in selling her tickets to a nation that has truly embraced its Christian baptism and identity.

Kudos to the Biblemode protestors, led by Bishop Benny Abante, who braved not only the rain but heavy criticism that was thrown their way at the height of their protests. They understood the issue and exercised their freedom of expression in order to protest someone who makes a mockery of the very same freedom. They understood that religious symbols should be kept sacred, and respected to say the least.

Kudos to all who have, in one way or another, helped us disseminate information and passed around our blogs and articles. This was a fight that we just can’t sit out; in the words of Pro-Life Philippines President Eric Manalang: “It doesn’t matter if it’s one against a thousand. We will fight, and we fight until the end.”

Now the difficult task of re-educating and evangelizing our society has come. Lady Gaga, like every great tragedy that has befallen mankind, is a reminder that we can become better than what we are now. Let’s not forget to share Christ to our families, to our communities; to those who have become lukewarm in their faith, and to those who live in darkness and have turned away from the light.
Posted by Courage Philippines at 10:19 AM