Courage Participates in Congress on Family 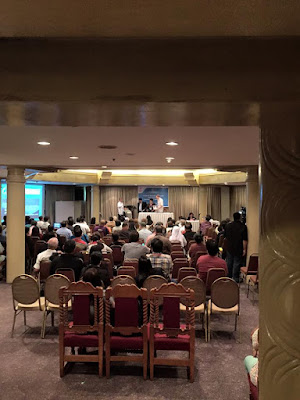 On July 25, Courage was invited to participate in the Congress on Family organized by the Marriage Encounter Foundation of the Philippines (MEFP). The MEFP is a national umbrella organization of family and life ministries. They organized this congress to gather the reflections and views of the laity on the key points from the Final Relatio for the upcoming Synod on the Family in Vatican in October.

One of the seven points of reflection is “Pastoral Attention Towards Persons with Homosexual Tendencies”. This was the section our Spiritual Director, Fr. Daniel Healy, was invited to speak on. His talk started on a reflection on the Woman Caught in Adultery from the Gospel according to John. It reflects on how Jesus treats sinfulness and sin. Jesus’ words are: “Is there no one left to condemn you?”“No one, sir” she answered. “Well then,” Jesus said, “I do not condemn you either. Go, and sin no more.” (Jn 8: 10-11) These inspired words are to be our guide in providing pastoral attention towards person with homosexual tendencies. 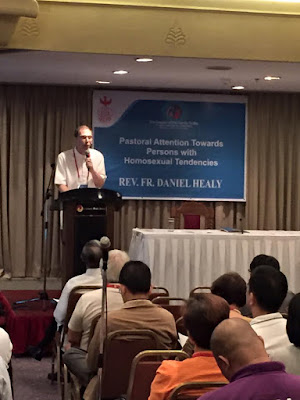 From this, Fr. Daniel further expounded on the topic and clarified three basic aspects of the homosexual tendency: person, inclination, and acts. On person, the Christian believes that every human being is born in the image and likeness of God, homosexual persons included, and they are therefore to be loved. On inclination, the Church does not consider this as sinful in itself but it predisposes a person toward what is not truly good for him or her. The term used by the Church is “objective disorder” as it is a burden, a weakness, a share in the cross of Christ. What one must do on this is to have the discipline and to grow in chastity and other virtues. On homosexual acts, the Church has always been consistent on this: “homosexual acts are intrinsically disordered…under no circumstances can they be approved” (CCC: 2357). Since it is intrinsically disordered or in other words, a sin, this is where the Church makes judgment on. As Jesus told the woman caught in adultery…”Go, and sin no more.” No sin is permissible and so the pastoral care for this is to lead persons who have committed homosexual acts to the Sacrament of Reconciliation.

After Fr. Daniel, one of the Courage brothers gave his testimony on his struggles and redemption. Several questions and suggestions were then mentioned by the audience including a massive education program, setting up help desks at a parish level, and formation of married couples on parenting since our Courage brother has testified that the homosexual tendency has its roots in the family.

The genuine concern that the participants showed after the talk are the seeds that God has planted in everyone’s hearts. We can just hope that God will continue to finish the work He has started. It was truly a grace from God for Courage to have participated in this very important pre-meeting on the Synod on the Family and to speak about pastoral attention for persons with homosexual tendencies. This is God’s work after all and we are mere instruments. Praise be to God!

Joseph Anthony of the Sacred Heart of Jesus

Posted by Courage Philippines at 10:51 AM