The Eucharist and My Journey to Chastity: A Testimony 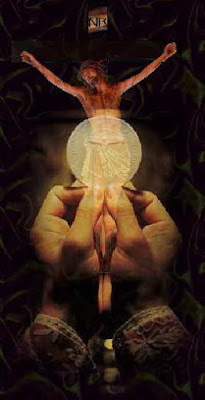 A testimony from one of our Courage officers, Bro. Joseph Anthony, on the occasion of the Feast of Corpus Christi.


700. That's the estimate number of sexual partners I have had. I was sexually active for many years before I joined Courage. One survey I read said that a sexually active homosexual man in the US would have an estimate of anywhere between 500 to 1,000 sexual partners in their lifetime. I was within this range so my estimate must have been correct (though I am a Filipino, the gay sex scene should be similar.)

Courage was to me God's answer to a lifelong desire to be free from sexual desires. I tried so hard and for so long to not engage in homosexual acts but nothing worked (and the 700 is the overwhelming proof of my failures). On attending my very first Courage meeting, God showed me that it was possible, through the witness of others who have been living chastely for many years despite their same sex attraction, to live a life free from lustful and homosexual acts. This was 2 years ago in 2014.

From that point on, I made a commitment to intensify my prayer life in order to storm the heavens for more graces to resist indulging in homosexual acts. I committed to doing one hour adoration twice a week then. There, in front of the Blessed Sacrament, I will be sorry for all my sins and seek God's deliverance and redemption. In May of that year and during one such adoration, I was driven to make an estimate of the number of sexual partners I have had. I would from time to time recall my encounters and be very remorseful for them before God. When I realized the quantity, I became even more remorseful. I prayed to God that He leads me to ways on how to make amends for all these. But the enormity of the offenses I made was just too great and the impact eternal that I do not have the capacity to do so. Then a message came to me: "I want you to receive the Holy Eucharist for every person you have had sex with." Only Jesus, who is eternal, has the capacity to make amends for the eternal damnation our sinful acts have caused.

It was then I understood for myself the meaning of how my weakness reveals God’s strength. Because of my weakness of the flesh, I am eternally connected to each and every person I have had sex with (because sexual union is unitive). And by receiving the Eucharist in me, Jesus will enter these connections to heal us.

Because of the number, this meant that I had to receive the Holy Communion as often as possible. A year has 365 days so to be able to receive communion for 700 meant I had to do this daily for 2 years. Thankfully, God has formed in me the habit of attending mass regularly on weekdays. My office then had a chapel near it and so I already had the habit of hearing mass during lunch or after office daily for years.

The message came with a bonus too. I received this task in May of 2014 (around 2-3 months after I joined Courage). In a succeeding adoration session, I was led to reflect that May is a month dedicated to the Blessed Mother. I was made to realize that if I was a true devotee of the Blessed Mother (which I thought I was), then I should also be hearing mass on Saturdays because this is a day of the week consecrated to her. Of course, I preferred sleeping till late on Saturdays so I never thought of hearing mass on Saturdays too. In my parish, they only had Saturday masses in the morning. I decided, at least for the month of May, to make the sacrifice and hear mass too on Saturdays. Here we can see how when God asks us to do something, He also provides the solution. In this case, it was sent through His mother.

It has been two years since God made me a daily communicant. By faith, I know that He has already healed and freed me from all the attachments I had with all my 700 sexual partners. By some unfathomable grace, I now feel freer. God has taken me to a point in my journey where I can now actually distinguish a temptation from sin. Before, I would immediately feel guilt and shame for every temptation and consequently commit sin. The guilt and shame are at the same time cause and effect of sinfulness; cause because I already feel dirty and so I might as well indulge, effect because once tempted I know that I will immediately give in. They used to be the same for me even if theoretically, I knew they were different. The Holy Eucharist has taken out this guilt and shame, which are the weapons of the enemy. God has now made me realize that being weak is not the news, but rather, that He comes and saves us is the Good News. I also have much hope and faith that I will soon get rid of my masturbation and pornography addiction too. I have experienced longer and longer periods of sobriety for these two. If He can miraculously deliver me from homosexual acts, He can for sure deliver me from other sins too.

As we celebrate the Solemnity of the Body and Blood of Christ this Sunday, let us more fervently adore Jesus in the Most Holy Eucharist. Let us open ourselves to His body and blood and receive Him that He may truly, fully and finally live in us for all eternity.

Mary, Mother of the Eucharist, pray for us.

+Joseph Anthony of the Sacred Heart of Jesus
Corpus Christi 2016

Posted by Courage Philippines at 12:11 PM