Tie A Yellow Ribbon - A Tribute to Cory 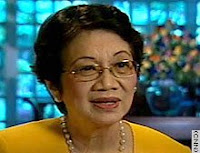 Today, August 1, the country mourns the passing of a great Filipino leader in the person of Corazon Cojuangco Aquino. I saw the news on TV early this morning and somehow I felt a sense of loss of someone who will be greatly missed by a people who owe her so much.

I don't particularly take a personal interest in her life. Of course every Filipino knows her in this country. But there are a few things worth mentioning about this heroine of the 1986 EDSA revolution.

First off, I admire how she had kept her integrity and displayed moral leadership despite the challenges that beset her administration. Politics is a dirty word for me and I have very little respect for politicians. Cory is an exception to this. She never clinged to power beyond her term even though she could. At the end of her term she gracefully exited the political arena. She knew there were other more experienced and competent (but not necessarily upright) leaders out there. Contrast that to someone who promised she would never run in the elections but eventually did and who leaves every one guessing as to her future political plans. I call that 'kapit tuko'.

Very few people exit this world who leave a good long lasting legacy and who will be remembered as someone who lived for others and lived a full life. She restored democracy back to us - our very own freedom that shouldn't have been taken away from us in the first place. While watching the news the past few days I was impressed by the overwhelming outpouring of love and prayers for her. Even the Holy Father has sent words of comfort and prayer for her. I find that a rarity among politicians to receive such kind of attention. She probably was and is the most prayed for person in this country. What a contradiction she is when you think about our past and present leaders who have left (and will leave) us with a shameful legacy of kleptocracy, tyranny, corruption, and political scandals. I want to think how her enemies would also wish that they receive even just a fraction of the same kind of treatment as she did in their deathbeds.

So there goes my little tribute to our beloved president. I know that she will continually intercede for our country as she always did. In heaven, there will be lots of yellow ribbons tied round oak trees.
Posted by Courage Philippines at 5:47 PM