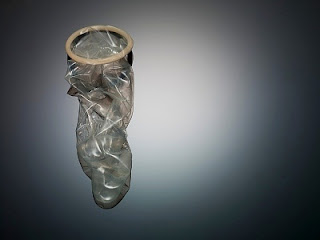 The HIV/AIDS issue is still far from over. Yesterday, the Department of Health just concluded a National HIV Summit with multi-sectoral representations from the government, faith-based groups, academe, scientific community, and media. I was not there personally, but I am beginning to wonder how the discussions went considering that the DOH and Catholic hierarchy are "clashing" on the promotion of condom as a means to prevent the HIV epidemic. For one, I commend the DOH for initiating the summit and their willingness to work hand in hand with the religious sector. That is definitely one positive approach in confronting the issue. However, condom promotion is another issue and I do not agree with it personally.

For one, check out these facts which I was able to research on the net. This alone should convince you to ditch the rubber:

* Since a woman is fertile for only 7 days of any 28 day cycle, but may become infected at any time, there are at least 4 times the number of days during which disease can be transmitted as opposed to fertilization.

* How often does the male condom fail to prevent conception during the first year of use? If used exactly as directed … 3%. If one also accounts for user error … 12%.

* There is much evidence today that the condom can fail to prevent leakage of HIV virus. Condoms contain tiny pores, 3500 microns in diameter. The sperm cell is 50 microns, and the HIV virus O.1 microns in size. The sperm cell, which is blocked by the condom, is 100 million times more massive than a HIV virus.

* The fact that latex condoms contain pores was highlighted by a major 1992 Food and Drug Administration (FDA) study, the first to simulate actual conditions of sexual intercourse. This study showed a detectable leakage of HIV - sized particles in one third of the condoms tested.

* Researchers from University College London conclude that condom promotion could increase rather than decrease exposure to STD if it had the unintended effect of encouraging greater sexual activity. They found that increased condom use will increase the number of transmissions of HIV that result from condom failure.

* Less than half of sexually active adolescents report that they use condoms correctly.

* A meta-analysis of available studies found that the risk of acquiring HIV was reduced by 69% when condoms were used by couple where one partner was infected and the other was not. The flip side of this reduction is that there is still a 31% risk of transmission.

* HIV and Hepatitis B and C are prevalent among injection drug users. Studies in Montreal, Vancouver and Seattle show that, contrary to popular belief, needle exchange programs do not decrease the incidence of blood borne infection. On the contrary, the highest incidence of infection occurred among users of the exchanges. In one study 40% of the users admitted to lending used syringes.

* Spermicide (nonoxynol - 9) may increase the risk of HIV infections by causing disruptions and lesions in the genital mucosal lining. (Health Canada: www.hc-sc.gc.ca/hpb/lcdc/bah/epi/nonoxynol-9_e.html.

For more info on this and other related STD facts, click here.

Comment: From a purely logical standpoint, why would anyone risk his life and health on a rubber that does not guarantee 100% protection all the time? Also, if you are aware that your partner has HIV, would you still have sexual intercourse with him/her even with condom? Does that make any sense at all?

Do you still remember the comments that the Holy Father made that condom distribution in Africa is not helping but in fact worsening the situation? As we all know he was heavily criticized on this, some even accusing him of issuing an irresponsible statement and endangering the lives of many people. Guess who sided with the Pope. No other than Dr. Edward Green. Check out this guy's credentials: Director, AIDS Prevention Research Project; Senior Research Scientist, Harvard School of Public Health and Center for Population and Development Studies, Harvard University. So, what is he saying on the condom issue?

According to this article, Dr. Green believes that "theoretically, condoms ought to work...and theoretically, some condom use ought to be better than no condom use, but that’s theoretically." The scientific community believes in general that condoms should lower HIV infection rate, but after numerous studies, they have found the opposite to be true.

Dr. Green has an explanation for this. He calls this phenomenon risk compensation or behavioral disinhibition.

“Risk compensation is the idea that if somebody is using a certain technology to reduce risk, a phenomenon actually occurs where people are willing to take on greater risk.” The idea can be related to someone that puts on sun block and is willing to stay out in the sun longer because they have added protection. In this case, however, the greater risk is sexual. Because people are willing take on more risk, they may “disproportionally erase” the benefits of condom use, Green said.

In a separate article on Washington Post, Dr. Green states that another contributing factor is that people seldom use condoms in steady relationships because doing so would imply a lack of trust. This is especially true for Africa where majority of cases are found in the general population rather than in high risk groups. It is noteworthy to mention that in Uganda, a program on abstinence and fidelity between spouses has yielded the most significant drop in HIV infection rate.

Dr. Green being a scientist is not totally against condoms, however. He for some reason believes that everyone should have full access to condoms and that it should always be a backup strategy for those who will not or cannot remain faithful to their partners. For more articles related to this, you can visit this link.

How about in couples where one is HIV positive? Is it morally permissible to use condoms? It's a bioethics question and a bit tricky. I don't feel competent to answer that, so I am referring you to this Zenit article entitled AIDS and the Spousal Use of Condoms.

In recent weeks, the issue of HIV and condom use has become a hot topic. This all started when the DOH gave away free condoms to the public on Valentine's Day. Archbishop Rosales commented it was a "narrow minded approach" on the DOH to engage in such and I agree. I believe that our current HIV crisis for the most part is a direct result of erosion of moral values particularly in the area of sexuality. How can you explain to me that the so-called MSM (men having sex with men) sector accounts for the greatest percentage of HIV infection? Before, it used to be that returning overseas workers who have had sexual contact abroad were the main culprits in spreading the disease, not to mention the cases of intravenous drug users who share infected needles with fellow drug users. How can our government allow free access to condoms while tolerating prostitution in the country, which is one of the major venue where this disease spreads? And the $8 million dollars that the DOH used to purchase truckloads of condoms? Shouldn't that money be spent on purchasing antiretroviral drugs instead to help the 4000+ confirmed cases of HIV in the country?

The problem with HIV/AIDS is that there is underlying human activity/behavior that goes along with it. Coupled with ignorance, the effects are truly devastating.

The solutions to the problem are quite obvious. Abstinence, fidelity to one's spouse (monogamy), comprehensive information drive on HIV/AIDS, a deeper understanding of human sexuality, and promotion and teaching of biblical sexual morality.

It's a tall order but it can be done and it's not the sole duty of the Church to promote these things. We as God-fearing people and responsible citizens should make the initiative to learn about these things, first to ourselves then to others. It's unfair to blame the Church altogether for her failure to inculcate these things in the minds of people today especially the young. Isn't it the primary responsibility of parents to teach their children sex education at home instead of passing this obligation to schools? Are not popular media (TV, print, internet) also to blame for this tragedy for widespread and unrestrained access to pornography? Still, I believe we can all do our share in fighting this epidemic and let us start now.
Posted by Courage Philippines at 12:17 AM