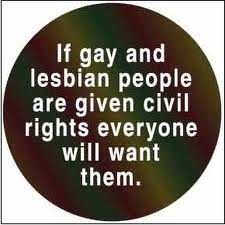 Myth No. 9: Homosexuals are seriously disadvantaged by discrimination.

Fact: Research shows that homosexuals actually have significantly higher levels of educational attainment than the general public, while the findings on homosexual incomes are, at worst, mixed.

One obvious measure of social disadvantage in America is reduced educational attainment. For example, this is an area in which there are obvious racial differences. According to 2008 data from the Census Bureau, 21.1% of non-Hispanic whites over the age of 25 have at least a bachelor’s degree, while the same is true of only 13.6% of blacks and 9.4% of Hispanics.

However, studies have uniformly shown that homosexuals have higher levels of education than heterosexuals, which hardly suggests that they are disadvantaged. The groundbreaking National Health and Social Life Survey found “that twice as many college-educated men identify themselves as homosexual as men with high-school educations. . . . For women the trend is even more striking. Women with college educations are eight times more likely to identify themselves as lesbians . . . .”

One study of homosexual men, using data from the Urban Men’s Health Study, reported that “65.7 percent of the respondents fall within the relatively narrow range of having a B.A. or an M.A.”

The data on the incomes of homosexuals tends to be more mixed. Some data, drawn primarily from marketing surveys, suggest that homosexuals have considerably higher incomes than heterosexuals. For example, a 2009 survey of over 20,000 readers of “gay” magazines and newspapers found that they had an average household income of about $80,000; whereas the Census Bureau reports that the average household income for all Americans in 2008 was only $50,303.

Other researchers have argued that such surveys may not be reaching a truly representative sample of American homosexuals. Lesbian economist M. V. Lee Badgett has virtually made a career of debunking what she calls “the myth of gay and lesbian affluence.” But even Badgett finds the data are, at worst, mixed.

A 2008 study using data on couples available from the 2000 census reported:

Homosexual activists like to attribute the small disadvantage in income for some subpopulations of homosexuals to societal “discrimination,” and use that as an argument for employment “non-discrimination” laws. However, other explanations, such as different career choices, are also possible.

If “discrimination” presented serious limits to the economic opportunities available to homosexuals, one would expect “non-discrimination” laws to improve their economic standing. However, research has not shown such laws to have that effect. A journal article on the issue declared:

In contrast to studies of anti-discrimination laws for women and ethnic minorities, we have produced no evidence that employment protections for sexual orientation directly increase average earnings for members of same-sex households.

-oOo-
Myth No. 10: Homosexual relationships are just the same as heterosexual ones, except for the gender of the partners.

Homosexual men and women are far less likely to be in any kind of committed relationship than heterosexuals are. A 2006 study by researchers at UCLA concluded:

Secondly, even homosexuals (especially men) who are in a partnered relationship are much less likely to be sexually faithful to that partner.

• A Dutch study of partnered homosexuals, which was published in the journal AIDS, found that men with a “steady partner” had an average of eight sexual partners per year.

• A Canadian study of homosexual men who had been in committed relationships lasting longer than one year found that only 25 percent of those interviewed reported being monogamous. According to study author Barry Adam, “Gay culture allows men to explore different . . . forms of relationships besides the monogamy coveted by heterosexuals.”

A 2005 study in the journal Sex Roles found that “40.3% of homosexual men in civil unions and 49.3% of homosexual men not in civil unions had ‘discussed and decided it is okay under some circumstances’ to have sex outside of the relationship. By comparison, only 3.5% of heterosexual married men and their wives agreed that sex outside of the relationship was acceptable.”

Meanwhile, a 2002 study showed that the five-year prevalence of battering among urban homosexual men (22%) was nearly double the rate among heterosexual women living with men (11.6%)—despite the fact that one might expect men’s greater size and strength to be a deterrent against a would-be batterer. A 2006 study—one of the few with a direct homosexual/heterosexual comparison for both men and women—found that of persons entering substance abuse programs, 4.4% of homosexuals had been abused by a partner in the last month, as opposed to 2.9% of the heterosexuals. The lifetime prevalence rates for domestic violence were 55% for the homosexuals and 36% for heterosexuals.


(Source: Family Research Council)
Posted by Courage Philippines at 12:04 AM