I Am Not Gay 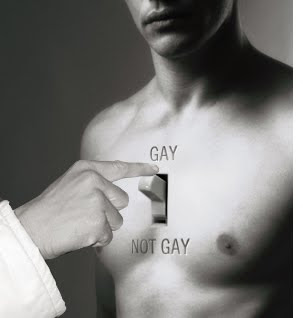 Here is an interesting thought of a young man with same-sex attraction about the gay culture and why he does not to identify with them. I totally agree with him. Struggles do not define a person's core identity because struggles can be overcome. The good news about this is you do not have to embrace a false identity. You can begin to take small positive steps in reclaiming your true identity despite the struggle. It's not easy but possible.

“I am not gay.” A simple statement taking back the effeminate and political power of the word, “gay.”

Despite my preference for guys, I really have very little in common with gay culture. A pseudo culture encouraged and controlled by radical leftist groups of counter-cultural rebels who have now evolved into a corporate machine, making a living on special interest legislation bent in one direction, not open to dissent or self-reflection whatsoever. Think I'm kidding? Log onto any gay chat room and disagree with the whole gay marriage amendment and then see what sort of vile responses you get from the gay 'community'.

This party that consists of a multitude of personalities and behaviors seems so desperate for normalcy and worldwide acceptance that it ignores the problems plaguing its own constituents: a disparate hodgepodge of lesbians, gays, bisexuals, transgender, and tons of other confusing neo-liberal labels, a party so hungry for acceptance and inclusion that it consistently seeks approval and acknowledgment from a society that would rather see it disappear.

Being attracted to the same sex yet not identifying with any 'community' is a concept that permeates within the younger gay population, a population that hasn't really had to live through the struggles of acceptance or disease but instead accepts it as every day life and something that they just have to deal with. It's a lot less a lifestyle of 'gay' in the sense that not everything is fun and giddy. The Me Generation considers being attracted to the same sex as just that, an attraction to the same sex, nothing more, nothing less.

In today's world, the word gay describes a whole cultural and political movement that promotes anti-male feminism, victim mentality, and left leaning politics. Gays believe that their sexuality engenders ethnicity and complete social identity. Generation Me, on the other hand, rejects the gay identity and its effeminate stereotype, and reclaims male masculinity through the belief that one can stay true to their roots and sustain an authentic masculine identity.

This form of masculinity is not the hyper-masculine leather daddy or bear/cub uber-queer choose-your-own-form-of-masculine definition, which is really just another way to be effeminate and another form of drag, but a real masculinity based on physical, essential, and cultural elements as defined by the majority of the male population, or at least that perception of masculinity.

So why would guys that don't necessarily identify themselves as gay find the need to distance themselves from mainstream gays? To reclaim a masculine identity to counteract the negative and effeminizing forces of modern gay culture because it promotes a more personal, individualistic attitude of the masculine ideal of self-reliance, independence, and personal responsibility through achievement, respect, and integrity. The feeling is guys should concentrate on building alliances with other guys, including straight men and possibly even straight fatherless families that need a father-figure to look up to, instead of just look at other males as sex objects. Why? Because it's more fulfilling in the long run.

The consensus is guys should develop strong relationships with heterosexual guys, not just others with the same preference because the forces emasculating gay guys are doing the same to straight guys. Think about the political-correctness of metrosexuality and other gender blending in today’s culture. Only through building an alliance with other masculine guys will the tide turn in the favor of reclaiming and establishing a masculine identity, for all guys.

To speak out as a homosexual against organizations such as the HRC or GLAAD may be equivocated by some as biting the hand that feeds you but the reality is these organizations do little to counteract the negative characteristics and qualities of the loosely knit and contrived communities they supposedly represent, and therefore the disconnect with younger homosexuals. GLAAD glorifies effeminate affectations and representations of gay guys as positive developments in the mainstream media but in fact, they aren’t. Effeminate gays on television or movies are gay stereotypes. They do nothing but further weaken gay guys in the eyes of heterosexual males. HRC gushes about its achievements in corporations and political campaigns. Each organization brags of inclusion, diversity, and equality. But should anyone speak out against either HRC or GLAAD out of a sense of individual thinking is considered homo-homophobic.

Think how republican homosexuals are treated as villains. Any gay that doesn’t believe in the feminist perspective is ridiculed and ostracized. Masculine guys are labeled as homophobic The current gay “culture” glorifies the world of alcohol, drugs, materialism, body disorders, and classism, and encourages young gays into it . Ask yourself if this community is really something you can feel proud of.

If you really look at it, the gay community is a disaggregated and forced collection of people who don’t really like each other that much or have that much in common. And really, should they? Would a lesbian really like being at a circuit party ? Would a military soldier feel comfortable on a Pride float? Proud of what? The GLBT and all of its anti-war Democrats? Let's be honest, most online profiles for gay guys list racial preferences, HIV-status, age, money and political affiliations. Gay bars are segregated along the same lines. Do gays really have that much in common, or are we just deluding ourselves?

Maybe there should really be a more libertarian approach to sexuality, the same approach that resulted in the decriminalization of sodomy laws in the Western world. Greek culture, Roman warriors, and other non-gay forms of male relationships were able to celebrate male sexuality without having the need to be part of any community. With the current anti-masculine gay sexuality, the community as everyone knows it, is crashing down because it isn't based on anything substantial. Aren't we done celebrating Stonewall? Maybe it's time to move on.

Guys who don't feel part of gay culture should also remove themselves from the culture of victimization and being the underdog. By remaining someone identified by their shortfalls, one will never truly be free of them. Face it, the majority of GLBT people these days haven’t faced much harassment yet gay culture continues to promote a victim mentality even in those who have never been a victim.

Guys who admire or love other guys should be more responsible, not give into the effeminate gay cultural fad; avoid the personal, career, and social pitfalls common to those who live in a completely gay ghetto world; and build stronger ties with heterosexual men who share common interests. Until then we will always be seen as the weak underdog. And we younger homosexuals find that unacceptable.


[H/T to Bro. R who forwarded this article to me.]
Posted by Courage Philippines at 12:15 AM