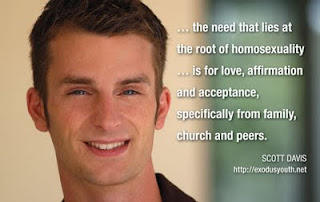 Why Labeling Oneself Gay Is Wrong and Tragic

Researchers have been trying for years to determine the cause of homosexuality. In effect, what they are trying to do is to identify some characteristic that makes homosexuality attracted people different from heterosexually attracted people. As Dr. Satinover points out, their efforts have come to naught. None of the studies, so highly touted in the media as proving a genetic cause of homosexuality, has been replicated in further studies. I might point out also that most of these studies have been by researchers who themselves are homosexually oriented. This itself certainly does not discredit their research, but one has to wonder why the other 95-97 percent of researchers don’t come up with similar findings. It may just point to how much gays want to believe that the condition is who they are.

The concept of a homosexual person is quite recent. Even the word “homosexual” was a nineteenth-century creation, developed with the emergence of psychiatry. For millennia mankind had recognized homosexual behavior, but saw it as just that – a behavior engaged in by some people. And although some people were clearly observed as engaging in frequent and exclusive homosexual behavior, no need was found to see these people as different in any way but their behavior.

Looked at historically, the gay identity seems to have come about as a defensive measure, a means of giving legitimacy to certain feelings and behaviors. The formation of the gay subculture and its associated political movement over the past thirty years has been largely an effort to give an identity to people who feel same-sex attractions. In this respect, the gay identity is part of a political strategy, used by gay leaders to do what political people have always done: expand their power and influence by convincing people to identify more and more strongly with their group. An “us-them” attitude, a powerful sense of victimhood, and a sense of superiority empower the gay movement and expand the concept of being a homosexual person to the point at which viewing the world from any other perspective becomes almost impossible.

The truth is, however, until someone can come up with a description for homosexuality that goes beyond merely describing the direction of a person’s sexual and romantic attractions, our using “homosexual” as an identity obscures truth and sows seeds of confusion.

Is this just an argument over terms, or does it matter whether we use homosexuality as a behavior or an identity? I maintain that it matters a great deal – especially for the homosexually oriented man or woman. How a homosexual person views his or her homosexuality not only determines their [sic] current identity, it can in large part determine that person’s future. When a woman decides that she is a lesbian, or when a man decides that he is gay, a number of things happen:

1. Other beliefs about homosexuality become accepted and enforced.
2. Life becomes limited and narrowed (as life is viewed in the confines of the “gay” prism).
3. Obedience is Christian teaching is made more difficult (if not impossible).
4. The prospect of change becomes less likely.
5. It is living a lie.

Reversing all of the above is a difficult process and usually a long one, but let me describe five elements that will be a part of the process:

1. Consciously dropping the identity.
2. Breaking certain ties (i.e., ties with the “gay” subculture)
3. Coming to believe that being gay and lesbian is a false identity.
4. Focusing on who you (really) are: (a man or woman, as your own basic biology attests)
5. Living the life (in the real world of healthy men and women, though not out of blind conformity nor as a program of denial but with a loving acknowledgement of unmet needs)
Posted by Courage Philippines at 12:40 AM