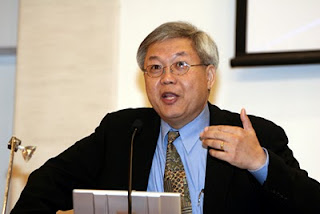 This is a news report of the recently concluded NARTH Conference on homosexuality held last September 10, 2011, at the Philippine Heart Center. The conference was successful as there were more than 200 people in attendance. The following day Dr. Wong also had an open forum with us in the SSA ministry and it was an incredible and fruitful learning experience indeed. Thanks to Bro. R for writing this report. You can also find this article on CBCP for Life website.

MANILA, September 12, 2011—A US-based clinical psychologist and co-founder of the National Association for Research and Therapy for Homosexuality (NARTH) shed more light on gender identity, sexual abuse, prevention, healing and other concerns regarding same-sex attraction in a whole-day conference attended by over 200 counselors, clinical psychologists, educators, pastors, religious formators, parents, and groups catering to individuals with same-sex attraction problems.
In “It’s Complicated: A Conference on Understanding Sex, Gender, Transsexuality & Homosexuality,” Dr. Melvin Wong debunked myth after myth about homosexuality by discussing the issue through medical, political, and theological lenses. He reiterated that homosexuality is a developmental disorder and that science has found no “gay gene” so far.

Repeating what he wrote in his book, Raising Gender-Confident Kids (2008, Armour Publishing, Singapore), Wong pointed out that “gender identity and gender orientation have a lot to do with early childhood parenting, and [provide] practical steps to raise gender-confident kids.”

Wong decried how the West, particularly American academia and society in general, has been so brainwashed by the pro-gay movement’s agenda of normalizing what used to be a gender identity disorder in its bid to promote gayness, the “gay lifestyle,” and same-sex union. He said he himself lived through how the DSM-III (Diagnostic and Statistical Manual of Mental Disorders) of the American Psychological Association (APA) was revised “by the fiat of a small committee vote” in 1973 in order to declare that homosexuality was no longer a disease. (He preferred the word “disorder” because of the stigma attached to “disease.”)

The Chinese-American psychologist related how he himself had been a victim of harassment by pro-gay APA members who were against his clinical practice of helping persons who wanted out of their homosexuality.

“I didn’t force these people (who came for treatment),” he pointed out. “They came knocking at my door.”

He then narrated the case of a colleague, Dr. Robert Spitzer, the leading proponent of the controversial revision, who made an eventual turnaround on his decision. To update the audience on the status quo, Wong noted that the APA in 2009 released a statement finally acknowledging the possibility of gender orientation change (via what is called “reparative therapy”), but that “this [statement] was totally ignored by (mainstream) media.”

In a separate interview, the California-based psychologist — who has traveled to China to help treat trauma patients — talked of the opportunities he has had of providing hope and facilitating healing in the people who come to him.

“I am a pain-chaser. Wherever there is terrible pain, I go there. I am in the business of looking for pain and healing it,” he said.

“Psychology is all about transformation, all about change,” he added. “I am here to give hope. The cross of SSA may be hard to bear, but it can be a blessing in disguise.”

Among those in the audience who shared their experiences was JP Balanza of the tsupport group Courage Philippines, giving a moving testimony that recounted his growing up without a male role model, as his father was an overseas Filipino worker (OFW). This deficiency drove him to a secret addiction to pornography and “acting out” his homosexual desires till he found healing and change via Courage.

Wong pointed out how disastrous the social costs of the Philippine government’s labor export policy has been.

The conference did not end without the psychologist answering queries during the open forum. He addressed one question about understanding the relationship between homosexuality and depression, describing the life-and-death internal dialogues of the SSA sufferer, which often leads to the point of becoming suicidal.

To the question, “How do we deal with the rabid pro-gay opposition in this country?” his reply was: “Tell the truth, but befriend and serve them, instead of polarizing them.”

The September 10 conference, organized by Bagong Pagasa, a Makati-based Evangelical Christian SSA support group, with Catholic support groups Courage Philippines, Ichthus, and After Call, with contributions from Exodus International and Bo Sanchez’s Light of Jesus Catholic Charismatic Community, tackled other aspects of the issue – the basics of homosexuality, transsexuality, and sexual abuse; diagnosis and prevention issues, particularly what teachers, parents, and churches can do; and the basic do’s and don’ts of counseling on unwanted gender issues.

Besides being co-founder of NARTH, Wong – who currently holds private practice in San Francisco and Fremont, California – is also affiliated with the American Association of Christian Counselors, Exodus International, The Society for the Advancement of Sexual Health, and the California Association of Psychology Providers.
Posted by Courage Philippines at 12:40 AM