Pope Benedict XVI's greatest act – his resignation – shows the love which the pontiff has for the Church, and his detachment from personal power, says Fr. Robert Gahl, associate professor of Ethics at the Pontifical University of the Holy Cross. [Read More]

2. Cardinal: Lent Is Time to Help Others

MANILA, Feb. 14, 2013— In his Lenten message, the head of Manila’s Roman Catholic Church called on the faithful to help other people, especially the needy. [Read More]

MANILA, Feb. 7, 2013—With steps being taken in some developed nations toward legitimizing unions or even “marriages” between persons of the same sex, some Filipinos may fall into equating such steps with the pursuit of progress and development. [Read More]

REYKJAVIK, February 15, 2013, (LifeSiteNews.com) – The tiny state of Iceland, known for going its own way among European nations, is looking at possible ways to ban internet pornography. [Read More]

7. How to Create a Strategy for Lent's Meatless Fridays

It's Lent and for many this is a time to create an intentional game plan for meatless Fridays. [Read More]

8. Benedict Will Still Be There for Us


9. Benedict's Renunciation and The Wolves Within The Church

Monday's was an earthquake announcement that had to have greater significance than the Pope merely being tired and worn out. So, really, why did Pope Benedict suddenly announce that he would abdicate the ministry of Successor of St. Peter in only 17 days? [Read More]

Fr. Lou Cameli renowned theologian in the Archdiocese of Chicago, has made it his personal mission to clarify this message and get it out. He's written a new book titled Catholic Teaching on Homosexuality: New Paths to Understanding (Ave Maria Press, paperback, 192 pages) which examines the Church's magisterial teachings and offers pastoral and psychological responses to it. [Read More]

Posted by Courage Philippines at 12:30 AM No comments: 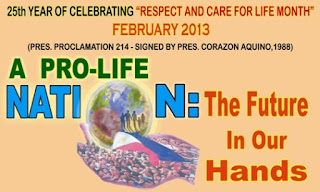 Please organize activities to promote our pro-life mission…defend and care for all human life, such as prayer rallies, forums, contests and signature campaigns. For more info and inquiry, call Pro-Life Philippines office at 7337027, telefax 7349425 or text us at 09192337783 or email us at life@prolife.org.ph  or view our website www.prolife.org.ph for updates. 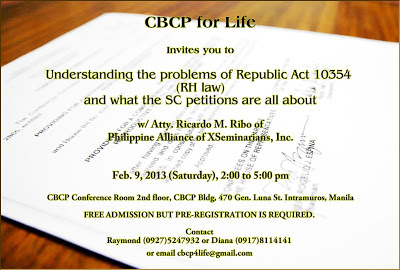 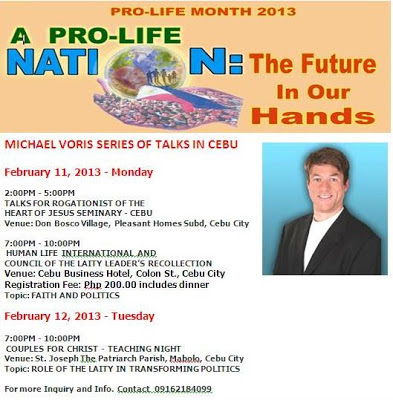 Posted by Courage Philippines at 10:32 AM No comments:

As a Courage Chaplain/Contact your presence at the annual conference is very important and appreciated.  We hope you will mark your calendar to join us at St. Mary of the Lake for four days of inspiring speakers, fellowship, prayer, and worship.  As we get closer to the conference, more information will be added to the web site.  We will let you know when this information is available.

In the meantime, you have access to our dynamic speakers and their presentations from the last two conferences via online video. Go to this page: http://www.couragerc.net/2012_Conference_Videos.html.

Posted by Courage Philippines at 6:01 PM No comments: