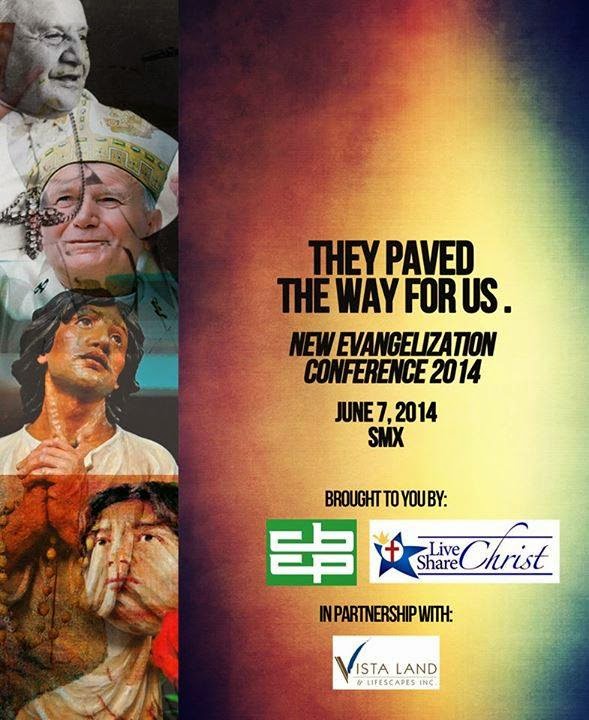 Everybody is invited to attend the First New Evangelization Conference on June 7, 2014 (Saturday) at the SMX MOA Hall 1 from 10 am to 5 pm.

A Catholic Expo will be opened at 10 am to start of the whole day's activities with CBCP President Archbishop Soc Villegas opening the festivities.

Admission is for free. Bring your family, friends, your whole organization and your whole parish. Be part of history and the preparation for the 500th anniversary of Christianity in the Philippines on 2021.

Posted by Courage Philippines at 9:44 AM No comments: 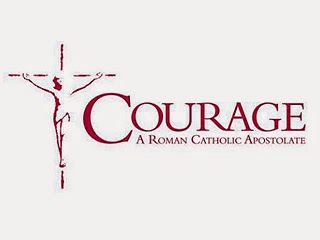 In this interview, Bro. Rollie answers some of the most commonly asked questions about homosexuality.


1. What are the (anatomical) differences between male and female population and the gay population? How about that segment of the population that have genitalia that is neither male nor female?

Male and female is anatomically different in their genitalia or their sexual reproductive organs. Males have penis and scrotum, while females have ovaries, Fallopian tubes, uterus and vagina. Hermaphrodites are those who have both male and female genitalia. Nothing changes anatomically when a male or female person embrace being part of the gay population - they remain having either a male or a female genitalia.

2. Is there really a “gay gene”? Is this really the cause of being gay/lesbian? Why is it that people say “I am a woman trapped in a man’s body?” Is there a scientific explanation for this?

There is no such thing as a gay gene. There have been some studies that supposedly "prove" that there is a gay gene, but taking a closer look at these studies, you would discover flaws in at least three areas:

1. The intention of the researcher doing the study (most of the time they belong to the gay community who wanted to prove homosexuality as genetic).

2. The validity of its subjects (there are some studies done on cadavers of persons who are supposedly "gay" in their lifetime - the question is: who determines if one is gay or not?).

3. The repeatability of the study (when the same study is repeated by different researchers, the results and findings are increasingly lowered, and comparatively they are fluctuating).

People who say they are gays or lesbians would have to admit that the origin of their homosexuality comes from gender insecurity that a person starts to develop even from the womb (when a fetus receives the rejection of his or her gender by the mother or the father), continues upon birth and in the other developmental stages. Continuous rejection and belittlement of their own gender weakens both concepts of self-identity and self-belongingness. This is particularly true of manhood, since there is an additional step of detaching from mother and attaching himself to his father. If this is disrupted, there would be what we call defensive detachment which contributes to gender insecurity. For more information, please visit www.narth.com (National Association for the Research and Therapy of Homosexuality)

3. How does being gay affect a person physically, medically? How does it affect a person’s health? What if he or she is not sexually active but just acts gay in every aspect?

Being gay does not directly affect a person physically or medically, unless he or she is caught up in the unhealthy lifestyle that is proposed by popular media particularly sexual addiction and emotional dependency. These lifestyles lead a person in a hydra of life consequences such as sleepless nights, paranoia, loss of job or HIV-AIDS.

If a person is not sexually active, but acts gay in every aspect - whether he or she is aware of it or not, whether he or she is ridiculed because of his or her outward behaviors, there is a certain dissonance in one's heart on an inner knowledge that the gay identity is not according to the plan of God. This is where we speak that homosexuality is not the language to be used but persons with same sex attractions, to highlight the truth that every person is made in God's image and likeness, and one's sexual orientation is just a part of his or her life and should not define him or her, and that he or she is empowered to do whatever he or she wants with it.

4. Medically speaking, what are the usual causes of being gays / lesbians / homosexuals?

In a study conducted by www.peoplecanchange.com, 1,000 gay men were asked the question: what factors contributed to your homosexuality? The responses were as follows: 74% father relationship, 69% peer relationship, 62% mother relationship, 48% abuse and molestation, 53% early sexual experiences, 35% personality traits, and 58% feelings toward males. Bottomline, the cause of homosexuality is gender insecurity. Increasing a societal or familial culture that promotes gender insecurity would increase the risks of persons to develop same-sex attractions. The problem is that we live in a culture that boxes people - when a boy is sensitive, he is labeled as sissy, and when a girl is brusque, she is labeled as tomboyish. There is a volume of other studies that are available at www.narth.com or the National Association for the Research and therapy of Homosexuality.

5. How would you advise ‘straight’ people in dealing with gays? How should we respond to them in a way that is healthy?

We should respond to them with humility, honesty and charity. There are concrete ways to show this. First, we must avoid labeling people as gay or lesbian or anything short of not calling them by their names. Second, we must love without judgment, making them feel that we are present before them to listen to them and share genuine love. Next, we must focus on behavior - that we accept who they are, but not what they do. Next, we must be good examples on the practice of every virtue. And lastly, we must be able to pray ardently for them, because ultimately it is Jesus who can change them.

We must bring to them the good news that they are more than their same sex attractions, that they are first and foremost persons, made in the image of God. There is much more to them than sexual attractions, and they are to rise above these carnal and inordinate desires to discover their own personhood. Let them be empowered that they, like all others, have the capacity to change.

6. What is your advice to gays about their lifestyle and how they can remain healthy?

First is to stop whatever sexual or relational behaviors they are committing that is slowly eating their personal lives. Next is to rethink about the ways they are behaving, the persons they are connecting with, and the objects and relations that they are preoccupied and determine which ones benefit them, and which ones should they change. Next is to enable them to become aware that gender identity and sexual orientation is only a part of one's person, and should be used as a license to do things that eventually destroy them or others - that they have the power whether to keep it, or display it to others, or to discard it. It is not one's fault that one has same sex attractions, but what one does because of this is to be judged as good or evil.

Homosexuals, as with any person, are called to chastity. We are to proclaim this truth to them, and challenge them that only through God and His Church can they do this. God loves them dearly, and understands their struggles, and would want to bring them into His loving heart. The commandments of God are there to protect them, not to limit them. True freedom comes from living according to God's beautiful plan.

Posted by Courage Philippines at 2:29 PM No comments:

The Third Way: Homosexuality and the Catholic Church


Real people sharing their homosexual struggles and a Church offering hope, refuge and redemption from the gay lifestyle. This is the Third Way, a must-see documentary for everyone! Now showing.

Special thanks to Bro. V for sharing this inspiring video.

Posted by Courage Philippines at 1:00 AM No comments: