Tell Them That It's Urgent 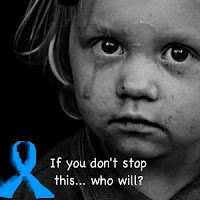 In followup from my previous post Save Our Children, Fr. Shay is now appealing to the President to certify the Anti-Child Pornography Bill as urgent. At the end of this article, there is an instruction there on how you can help on this matter.


If there is one great thing that President Gloria Macapagal-Arroyo can do with her awesome power in the Philippines, it is to use it for the well being and protection of vulnerable children. All she has to do in her State of the Nation Address on 27th of July to win a place in legal history is to tell her Congress that the Anti-Child Pornography Bill is "urgent". All the Representatives have to do is to vote "yes" and they will save thousands of children from rape and abuse in the years to come.

That alone will be enough for the Congress to pass this Bill, the Senate version has already been approved. It's very shameful that the Philippines, a nation where the vast majority children are loved, cherished and protected by their families that the State has failed in its obligations under international treaties and protocols to protect them by law from the sexual abuse that is inevitable in the making and distribution of child pornography. This is a moral issue of the highest order; the dignity of the nation is at stake before the world.

In most countries with updated anti-child pornography laws, the crime is seen as heinous and penalties can be 5 to 20 years in prison. In the United States, an offender with multiple images in his possession can get life in prison. Most Filipinos have never seen child pornography, if they did and realized how terrible it is, then there would be public outrage and rightly so.

The developed countries are offering training in computer forensics to Philippine law enforcers to enable them to detect, identify abusers sending illegal images over the internet once the law is passed and the guidelines for its implementation are published.

Last week, two journalists were visiting the sex capitol of Central Luzon, Angeles City. Foreign and local sex tourists flock there to abuse women and children with impunity and the blessings of the politicians who issue operating permits to the sex clubs. They must be held accountable too.

The journalists were offered a DVD with the title "child abuse", "that's for free", the pimp told them, "maybe you want the real thing too" he said offering them a 15 year-old child for as little as twenty Euro( US$28 18GBP). They took the DVD and disgusted, declined the offer of the child. Not far away, police looked on unconcerned. But the journalists learned just how prevalent is the trafficking and selling of young girls and child-porn on the streets of many a Philippine town like Angeles City with a thriving sex business.

This is the shame that all decent Filipinos don't have to live with before the world. Rather than hiding in shame, we have to step forward, take a stand for the dignity of Filipinos everywhere and speak out against crimes against children. Not to do so is a form of silence that is consent.

The Catholic Bishops Conference of the Philippines has yet to support this important bill and urge the president to mark it as urgent. I have every confidence they will. Then, when passed, the abusers can be brought to justice. The video taken by the journalists showed a Caucasian 10 year-old blond girl being sexually-abused, they reported. This kind of child pornography entices Caucasian sex tourists to seek children to abuse in their home countries. In another clip, they said, an Asian child was being abused by a Caucasian man with a British accent and he is fully recognizable.

It is a crime that has life-long consequences as it played over the internet to a worldwide audience. A child abused at an early age and now 15 said. "Knowing that some sick person is looking at me on the computer every day in a way that no child should ever be looked at . . . makes me feel violated (again). It makes me want to throw up."

Whatever you can do, please do it. Write P.O. Box 68, Olongapo City, Philippines. Email: shaycullen@gmail.com

This is Fr. Shay Cullen's open letter to President Gloria Macapagal-Arroyo appealing for the decalaraton of the Anti-Child Pornography Bill No.684 as urgent.

At no time in the history of the Philippines has there been a greater opportunity for the President to act decisively to protect Filipino children at grave risk than the present historical moment. Thousands of Filipino children are damaged for life when abused in the making of child pornography.

The abuse continues when the images of the sexually abused children are spread around the world through the internet and are availbale on the streets of the Philippines for all to purchase with impunity. They are shown to other children as training videos to seduce them into becoming Commercially Sexually Exploited Children and they too are abused and damaged for life.

By immediately certifying as "urgent " the anti-child pornography bill pending before the House of Representatives, House Bill No.684 entitled "An Act Defining the Crime of Child Pornography, Imposing Penalties Thereof, and for Other Purposes" you will save thousands of children for years to come.

The Philippines needs this law urgently to protect children and to fulfill the nations international obligations under the Convention on the Rights of the Child and other international protocols undertaken by the State on behalf of the Filipino People.

The passing of House Bill No.684 at your behest will be a proud historical legacy and provide protection for children for future generations.

We the concerned citizens, representatives of agencies and organizations working for the protection of the dignity of the Filipino people and the rights of the child strongly appeal for you to act and announce the bill as an urgent priority.


Please copy this and send to the following e-mail addresses (updated list):