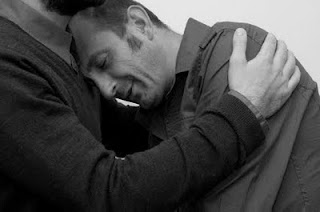 I want to share this very profound article especially to those who do not understand what people with SSA (same-sex attraction) go through. It is my hope that you my dear blog reader will come to know the 'Jacks' around you, and to all the 'Jacks' reading this I hope that we come to know ourselves in a much deeper way, that making the public accept and tolerate homosexual behavior is NOT the answer to our struggle.


What did I know? Not much. I knew that I had a friend who just
shared with me that he struggled with same sex attraction.

I knew I was honored that he shared something that honest with me.

I knew I wanted to help him out however I could. But I didn't know how.

I didn't know that the desires he had were but one small part of his
identity and that he didn't identify himself as gay or homosexual.

I didn't know that what he really needed was a hug.

I didn't know how healing it could be for him to just have safe hugging
and physical touch.

I didn't know that getting `filled up' with safe, non-sexual physical
contact with men actually made it easier for him to not sexualize his
same sex needs.

I didn't know that all boys have same sex needs. That is, all boys need
fatherly, loving physical touch and lots of it usually in the form of
wrestling with Dad, hugging Dad, piggy-back rides from Dad, etc.

I didn't know that if they don't get these needs met by Dad or
some other fatherly figure in a non-sexual way, it's not uncommon
for these neglected or abused boys to sexualize those needs
and seek to fulfill them sexually.

I didn't know that my friend had been neglected and abused by his Dad
and smothered by his Mom.

I didn't know that my hugging him helped fill these core
needs for affection in a way that helped him get what he didn't get
from his father.

I didn't know I could do more than wish him well and pray for him.

But there were some things I thought I knew which turned out to be
wrong. "If he's tempted by men, won't my hugging him just feed his
temptation? If for example, I have lustful thoughts for a woman,
hugging her would seem to make the problem worse not better.
Right?"

Well, that's where my ignorance was profound. My lust for
women is not the same as Jack's lust for men. His temptation was
coming from unmet needs for fatherly contact, and he had just
sexualized those core needs.

I had another question. If all he needed was some friendly non-
sexual physical contact with men why hasn't he got that someplace
else by now? Well once again, I didn't know Jack.

I didn't realize how hard it was to find such contact, since
our American culture is so quick to think that touch between men is sexual.

I didn't realize how many men simply feared sharing these needs
let alone getting them met by friends.

I didn't realize how `non-touching' we are and how toxic
this non-hugging environment is for men who didn't get their fatherly touch
needs met as a boy.

There remained one more question. What would others think about me
if I was seen hugging a man more than 1.25 seconds? I'll own that I
wondered what others would think. But once I realized that a friend was
dying of thirst and I was holding a glass of water, all those thoughts and
fears faded in importance.

"When I was thirsty, did you give me a drink or did you just
pray for me and send me on my way, still thirsty?"

My brothers, I beg you to get to know Jack. He is in your church.
You work with him. He's in your family. But he probably hasn't told you
for fear of what you'll think. Please give Jack a hug, a long hug, and help
him get what he never got as a boy.

If your friend, coworker, brother-in-law,or church brother gives you this
and tells you, `I'm Jack,' please let him know that you want to know more
and be a man.

Help a brother. Give him a hug.
Posted by Courage Philippines at 12:34 AM