Are Catholics Missing Out On Tithing? 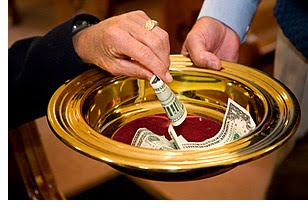 I attended a Feast session in Manila a couple of weeks ago and the topic of the talk was on tithing. I give money when the collection basket is passed around during Sunday Mass, but I must admit it's nowhere near 10% of my monthly income, more often than not just a few pieces of coin. That attitude is slowly beginning to change, thanks to this eye-opening talk. But can tithing make us better Christians? I'm posting here an article of Bro. Bo Sanchez. I hope we all become convinced in our hearts to make tithing a habit not out of obligation, but out of generous giving.


There's a born-again church in The Fort that built a P400 million building. They're expanding that structure and are building another one worth P500 million. This church has now 500+ churches spread all over the world, 300+ of which are in Africa. There's another born-again church building, a mega structure in C5 costing P2.5 billion. They've been able to build 100+ home churches in mainland China. There's another church in Davao called Kingdom of Jesus Christ. Pastor Apollo Quiboloy broadcasts his message through his own television station plus 500 affiliate cable channels. His church has now spread to 100+ countries around the world. Where do they get all the money to do all these? Easy. Their members practice Tithing.

Catholics? Many Catholics don't even know what it is. Thus, we're missing out on the many blessings of Tithing. Both individually and corporately. We're known around the world as the Church that has the noisiest offering in the planet. "Kling, klang, klong..." Because everyone gives coins.

Here's the theological reason for not teaching Tithing: As Catholics, we believe that Tithing is an Old Testament Law, not a New Testament Law. So we teach generosity, not Tithing.

I'm a communicator. I've been one for 30+ years. And here's a rule in communication: Always be specific, not vague. I've learned that whenever I teach people something vague, they'll have a hard time learning the lesson or putting it into practice.

Yes, we teach people to be generous. But what does generous mean? The options are endless. And the more options you give, the more confused people are, the more inaction there will be. Does generosity mean that Catholics give coins? Does generosity mean that Catholics pull out - at least a paper bill? A friend told me that before he joined the Feast, he felt very proud he gave P20 every Sunday, even if he was earning P100,000 a month.

Does generosity mean that Catholics give until it hurts? Well I know of a millionaire who felt pain when he couldn't find P20 in his wallet - he was forced to give P50.

Here's my point: Even if Tithing isn't a Law anymore, we need to teach Tithing as a powerful guideline to follow - something that will bless our life abundantly! Because God promised He would return whatever we give a hundredfold. And God fulfills His promise. This space or even tons of books are not enough to record all the testimonies how people receive blessings double or more than what they give to God - through the Church or to our faith community. Instead of giving vague instructions like...

"Give whatever you can give cheerfully..."
"Give as the Holy Spirit inspires you to..."
"Give what your heart dictates..."

I'm worried. Catholics aren't receiving the blessings of Tithing because we don't teach it!

That won't happen to you. Because you'll hear it from me today. And today, you'll receive the rewards of Tithing!


"Bring the whole tithe into the storehouse, that there may be food in my house. Test me in this,” says the LORD Almighty, “and see if I will not throw open the floodgates of heaven and pour out so much blessing that there will not be room enough to store it." - Malachi 3:10
Posted by Courage Philippines at 12:04 AM