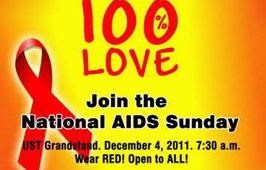 THOUGH the incidence of HIV infection and AIDS in the Philippines remains at a relatively low level next to Thailand and African nations where figures ballooned following massive condom use campaigns, there are still Filipinos who live with the disease and who need support and compassion. [Read More]

2. Pontiff Reports That Africa Has a Freshness of Hope

VATICAN CITY, NOV. 23, 2011 (Zenit.org).- Benedict XVI dedicated today's general audience to a review of his weekend trip to Benin, reporting that he found in Africa a "freshness of hope." [Read More]

3. Health Risks in 'Reproductive Health': New Studies on the Pill

More Research on What Women Are Not Being Told

WASHINGTON, D.C., NOV. 23, 2011 (Zenit.org).- Approximately 100 million women worldwide use some version of "the Pill," or combined oral contraceptives. In the developed world, the use of some form of contraceptive is nearly universal, with surgical sterilization and oral contraception the most popular methods.[1] As the United States and other Western powers continue to spend billions of dollars on the "reproductive health" of women in the developing world, the numbers of users continue to rise. [Read More]

4. Tremendous Benefit for the Philippines

In a cooperative venture, the Tim Tebow Foundation and CURE International will be opening a new children's hospital in the Philippines. [Read More]

5. Steve Jobs Was Glad He Didn’t Become a Victim of Abortion

A new biography of Apple founder Steve Jobs indicates the businesses visionary was glad he did not become a victim of abortion. [Read More]

6. Thanksgiving: A Call to Pray Before Feasting

The Thanksgiving tradition began with our early Americans, the English colonists--known as Pilgrims--who were celebrating days of thanks for the success of their first harvest. This was all part of their religion. These were days of mostly prayer, not just days of feasting. [Read More]

NEW YORK, NY, November 25, 2011 (LifeSiteNews.com) - In the aftermath of the legalization of gay “marriage” in New York state, some commentators had wondered why, despite their leadership role in the fight against the law, the state’s Catholic bishops’ efforts had ultimately seemed so strangely half-hearted, given the high stakes. [Read More]

WASHINGTON, DC, November 25, 2011 (LifeSiteNews.com) – Homosexual activists have becoming “increasingly aggressive” in attacking their opponents and in shutting down any debate, but despite their efforts “there are legitimate grounds for debate on the origin, nature, and consequences of homosexuality,” argues a new analysis from the Family Research Council. [Read More]

9. Pamela Anderson Playing the Virgin Mary Says It All

Pamela Anderson, the silicon enhanced sex tape star and Playboy centerfold, will be playing the Virgin Mary in a sketch comedy show that will appear on the Comedy Network and in Canada. [Read More]

November 25, 2011 (LifeSiteNews.com) – As the pro-life film 180 continues to attract an ever growing viewership, its creator Ray Comfort has announced that the video is doing more than just changing people’s minds on abortion: it is saving people’s lives. [Read More]

Posted by Courage Philippines at 12:32 AM