The Battle for Normality 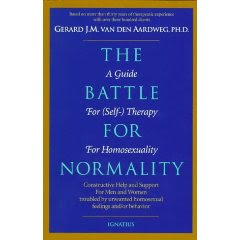 I want to give an overview of this book by Gerard J.M. van den Aardweg, Ph.D. entitled The Battle For Normality: A Guide For (Self-) Therapy For Homosexuality. I remember having bought this book while still in college in National Bookstore, but for some reason it came on as "too heavy" for me and so I just let it sit idly in my closet for years. Now, I am leafing through the pages of the book once again in search of answers that I hope I would be able to share with you through this blog.

This is the latest book of Dr. Aardweg on homosexuality. He is a Dutch psychologist (a Catholic one I guess) who has treated hundreds of persons with SSA and has cured many of them. He dedicates this book to "men and women tormented by homosexual emotions who do not want to live as homosexuals, who want constructive help and support, and who are forgotten, have no voice, and get no answers in our society, which recognizes only the emancipatory homosexual who wants to impose his ideology of "normality" and "unchangeability" and thus discriminates aginst those who know or feel that that is a sad lie."

Gerard van den Aardweg studied psychology at Leiden University, and received his Ph.D. in psychology at Amsterdam University. He has had a private psychotherapeutic practice since 1963 in Holland, specializing in the treatment of homosexuality and marriage problems.

This book is essentially self-therapy intended for persons with SSA who want to do something about their "condition", but do not have the time or opportunity to visit a therapist with healthy ideas on the matter for there are very few of them. The author clarifies though that it does not mean anyone can "go it alone".

According to him, "He who wants to overcome emotional problems needs a realistically understanding and encouraging guide to whom he can speak his mind, to help him discover important aspects of his emotional life and of his motivations, and to coach him in his struggle with himself. That guide need not necessarily be a professional therapist. Preferrably, he should be, but on the condition that he has healthy ideas about sexuality and morality; if not, he may do more harm than good." I agree.

Here is a general outline of the topics covered in the book which might be of particular interest to you.

1. Homosexuality: An Overview
Insights in Brief
Not Normal
The Role of Self-Labeling

6. The Role of Therapy
Sobering Remarks on "Psychotherapy"
The Need for a Therapist

7. Knowing Oneself
Working through Childhood and Adolescence
Knowledge of the Present Self
Moral Self-Knowledge

"There is a need for such a practical "guide" because there are very few able therapists who want to help the well-intentioned homosexual to change, and because most existing works on homosexuality - no matter how excellent their content may be - are chiefly about theory, not about every-day self-therapy. Theoretical subjects are discussed, too, insofar as they are necessary to be able to fight the homosexual inclination and to refute certain myths that may undermine the homosexual's confidence in the possibility of a change." - Richard Fitzgibbons, MD, Comprehensive Counseling Services

"Dr. van den Aardweg's book provides a useful, 'no-nonsense' guide for self-help therapy. His approach calls for an appreciation of traditional gender roles, and demands an unstinting self-examination and strong effort at self-discipline in the struggle the homosexual person faces toward full maturity. Many readers will be helped by this practical book." - Joseph Nicolosi, Ph.D. Author, Healing Homosexuality

"This scholarly tome is not for the mildly curious, but for those who are willing to take the time to unearth the depths of the root issues underlying the homosexual issue. The author reveals the key to this mystery, the problematic issue of self-pity. It is well worth the time it will take to digest its complex, detailed, in-depth study of homosexuality." - Anita Worthen, Author, Someone I Love is Gay
Posted by Courage Philippines at 1:09 AM

Email ThisBlogThis!Share to TwitterShare to FacebookShare to Pinterest
Labels: books