Mary and The Last Judgment 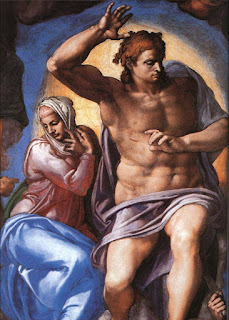 The month of May will not be complete without a tribute to the Blessed Virgin Mary. For this year, I chose to dwell on Mary's role at the Last Judgment. All we know from biblical accounts is that on that day Christ will come in glory and will separate the sheep and the goats, an unappealable and definitive judgment. But will the Mother of God be sitting idly by? What is her part on this grand finale of human history? A private revelation to a visionary may give the answer to this intriguing question. As a faithful I don't oblige you to believe, but it's worth knowing nonetheless. This short excerpt was taken from the book Experience in Eternity and this scene is actually one of my favorites in the book because it gives hope to sinners, a role truly befitting the Blessed Virgin as Refuge of Sinners.

Intercession by the Virgin Mary and the Saints

Suddenly a great thunder rumbled from afar, a phalanx of evil spirits as thick as a red fog approached. The sinners were filled with fear and began to run, not knowing where, calling for help and in so doing, knocking each other down. From the opposite direction an enormous serpent appeared covered with luminous scales, lifting thousands of frightening heads. It represented the tenebrous forces of evil formed by sins in the dark regions of Hell. Shouting, howling wicked demons pushed the sinners against the eyes of the serpent who pierced them with spikes from its eyes. Fuming fire came forth from its throat as well as a horrible odor. Hence the eternal torment for those sinners of the earth.

At that instant, descended from above the unexpected salvation, virgins, beautiful and white, surrounded the Holy Virgin singing harmoniously:

"Thou art amongst us, O amiable Virgin of spiritual beauty and love. Glory and praise. Blessed are thou.

Her features were an unspeakable spiritual beauty never before known in time. This apparition filled the sinners with hope.

Then She approached Her Divine Son. Looking at Him mournfully, she said in Her soft voice, “Tell me, O Lord, where are those of whom I begged pardon?” “They are here,” Christ replied. The Angels called their names and the sinners opened their lips. Dumbfounded, they stretched out their arms towards Her. “And to you, who loved and implored my Mother for My Forgiveness I grant you pardon.” Scarcely had He concluded these words when the absolved sinners ascended to Heaven, forming a circle around the beautiful Mother of Christ. Following Her gesture before Her Divine Son, they thanked Him. The face of the Holy Protectoress was luminous and joyful as they ascended to the heights.

The great Prophet of Christianity came forth and inclining his head towards the Redeemer prayed thus: “O Lord, You know how much I condemned sin and vice during my life on earth. Now on this day of Final Judgment I plead pardon, through Your bountiful mercy, for those who have offended Thee. These sinners, who fear Thy Divine Justice, have made petitions and prayers, have honored me on earth and seek Thy pardon and clemency now.”

The trembling Prophet turned to Christ, who replied, “They diverted My Commandments without restraint and conscious of their sins they have appealed to thee to ask for salvation; nevertheless, through prayers, those sinners are pardoned.” Following this proclamation there was heard exuberant shouts of joy as the pardoned sinners ascended to Heaven. Then the great Saint fell on his knees pleading pardon to the Savior for the sinners who had never known Him yet lived just and good lives. And Christ said, “Yes, it will be for those of whom you plead. Meanwhile, for those who detested evil and performed good works, these I do not blame for not having the knowledge of Baptism, yet are the same with me, even though they were separated from the Christians. To each and all of you I concede pardon.” Then a great number of non-Christian souls who had lived in justice and goodness entered Heaven through the intercession of the great Saint.

And again, the vault of Heaven lit up with the image of the Virgin Mary, who was richly adorned, yet bowed with a look of sadness and stillness. “For what do you request now?” inquired the Son of God. She responded, “I have come again to plead for the children of those mothers who wept tears for their own offspring.” Again, huge numbers of saddened faces turned to joy as they were pardoned through their mothers’ prayers and mounted to Heaven.

Meanwhile, a luminous galaxy of Saints, male and female, surrounded Our Lord with delicate and beautiful countenances, one after another interceding for the sinners who had prayed to them, entrusting their souls to them while on earth. Each petition was considered and a greater multitude with jubilation and lightness mounted to the Eternal Kingdom.

The first chosen Apostles came forward before Christ to ask pardon for those sinners who had invoked them while on earth. And Christ said, “I do not refuse this grace to my first chosen ones.” Turning towards the sinners who had courageously followed the ancient customs and were devoted to their intercessors He said, “I also pardon you who have accepted the true faith.” After these words the ancients who believed and accepted the new religion rose up with jubilation and followed the twelve Apostles towards Heaven.

There in the clear blue sky remained our Lord Jesus Christ, radiant in an infinite light. When His Holy Mother appeared, She wept as She beheld the remaining sinners. She then addressed Her Divine Son with trembling lips. “Thou who are the Almighty forgive them all. They know Thou art just, and this Day of Judgment would be more beautiful if it were completely joyful. Remember the day of Thy Resurrection. You pardoned even those in the deepest regions of Hell. Thou judges with tenderness, but can these wicked rebels remain side by side with the good and just in Paradise?” The Virgin was silent, only her countenance pleaded mercy. She remained exceedingly quiet, yet pleading. And Her Divine Son gave in to His venerable Mother and pardoned the less evil amongst the rebels. He rose with His Mother beside Him, followed by an immense spiral of jubilant souls like the suave perfume of incense rising from the altar.
Posted by Courage Philippines at 12:02 AM