And After This Our Exile (Part 2) 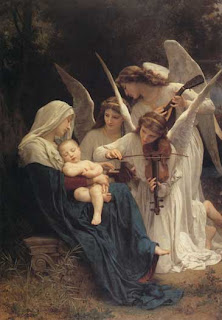 Three traits of her life are particularly relevant for the times we live in (and, it may be, for those that are fast approaching). These traits can transform us into the type of Christian capable of being loyal to Our Lady and of giving testimony of her power to show us her Son when our exile is over.

The first trait is her silence. Anna Ajmatova, one of those whose voices clandestinely continue to give testimony of all vigorous awakening of the faith in Soviet Russia, knew how to make this trait of Our Lady’s life stand out by way of conspicuous contrast. During the Crucifixion, Our Lady stands next to the tearful Magdalene, who is beside herself with grief. There, also, stands the faithful disciple, who is paralyzed by the appalling death of the Holy of Holies, stricken as if he has been turned into stone. The silent and serene suffering of the Virgin Mary stands out in contrast with the attitude of the other onlookers: “No one dared to look towards the place where the Mother stood in silence.” Those words seem to evoke those other verses of the liturgy of the Church that remind us of the sorrows of the Blessed Virgin:

A suffering as profound as this, inspires silence and reflection, does not render the mind powerless but rather sharpens it, makes it more intensely aware. And this silence, in which the suffering is endured, is in stark contrast with the uproar of strident voices that reaches us through all the channels of the mass media – oral, written, and visual. A deafening clamor stuns the soul with a confusion indistinguishable from chaos itself. It is her silence that the Virgin Mary recommends to us as a weapon to prevent what is essential, the only truly important matter that we should keep in our hearts above all things and at whatever cost, from being buried under the avalanche of detritus pushed ahead of it by the wind and passing away like the shadows of darkness before the coming light. Without silence, prayer is impossible. And without prayer, without man’s concentrated and attentive dealing with God, what chance do we have of ever remaining faithful? Edith Stein, who was a Jew and the assistant of Husserl, was converted to Catholicism through reading the works of St. Teresa of Avila, a Discalced Carmelite. She was deported to Auschwitz and was most probably killed in the gas chambers of that prison camp. She once wrote: “The Virgin who kept each one of the words of God in her heart is the archetype of those attentive souls in whom the sacerdotal prayer of Jesus is reborn.”

“Attentive souls”: not distracted, not dissipating their attention on “other things” but concentrating their energies on the one thing necessary: obedience to and the fulfillment of God’s will at each moment of their life, in the performance of each task, in each interior and external activity. And this too, taken together with her pondering “each one of the words of God” in her heart, is the second lesson we can learn from Our Lady’s life: that obedience to God is not servile. It does not subjugate our conscience. It moves us in the depths of our being to discover “the glorious freedom of the children of God” (J. Escriva, Friends of God, no. 27). In these times of ours, no one seems willing to be burdened with commitments of any kind. To verify this it is enough only to take note of the diabolical persistence of the attempts being organized to destroy the bonds of marriage, the very root of society. And such attempts are now being deliberately made practically all over the world. Governments are compelled, as a result, to construct all sorts of rules and regulation, and are forced to install complex bureaucratic systems that will ensure the necessary minimum of legislative control: obedience to God and to legitimate civil authority out of love for God in all that it lawfully commands remains a bare possibility. It is only through obedience that the ordering of freedom can be achieved. Only then can we be truly free in a humane and orderly way in every circumstance of our life.

Finally, the third outstanding characteristic of Our Lady’s life is her love for and fidelity to the Cross of Christ. The Virgin Mary has rightfully been called co-redeemer because of her intimate and profound participation in the Passion of her Son. The evil of sin is not going to be neutralized by speeches, countered by discussions or legislated out of existence by organizational committees. And sin is the root of all the evils found in the world. “What will come to our help,” said Edith Stein, “is not human perfection, but the Passion of Christ. My desire is to participate in it.” It is not a matter of being dramatically ostentatious, of big talk, or of aspiration to some fantastic heroism. Once again it is more a matter of our being clearly aware that our love for the Cross must be directed, like that of the Virgin Mary, towards what our Lord wants of us, where he wants us to be, and how he wants us to live. We must do all he wants us to do in the way he wants us to do it. Ordinarily, we are required to participate in the Passion of Christ in a humble manner through our efforts to eliminate with all the consequent discomforts, the obstacles that keep us from fulfilling his will and through all the contradictions that arise in our struggle to remain firmly in the Truth of Christ. After this our exile, the Blessed Virgin can show us Jesus. Just as Rebecca made Jacob similar to Esau, you will remember, our Mother Mary can also make us to resemble Jesus, the Son of God, the First Born of all creatures, that the Father may give us his blessing. The Church has no doubt that she can do this for us and so sings to her:

Yes, indeed; the Virgin Mary must be endowed with something very special, something very delicate and pure, something unique among the many gifts that God has given his creatures, to be able to inspire not only pious and simple poets like Gonzalo de Berceo, but also wild and turbulent natures, often cynical and reckless, like Francois Villon who wrote satirical and sometimes scabrous poems. Yet Our Lady inspired him to write with humility that gentle petition which he called the Ballade pour prier Notre Dame. In this Ballade he calls Mary, (in the envoi, the Princess), “Dame du ciel,” “Regente terriene,” to whom the sinful soul makes a request that she intercede for him before her Son: “Tell him that I am his, that my sins may be absolved by him. Tell him to forgive me as he forgave the Egyptian, or as he did with the cleric Theophilus, who was forgiven by you and absolved of his sins in spite of the promise he had made to the devil…” Mary is the Lady and the Teacher “to whom all sinners must have recourse.” She is the one who carried in her womb “the Almighty, who, assuming our weakness, came down from heaven to save us, and offered up his youth to death.”

In these times of widespread defection, compromise, and disloyalty, it is very moving to find a man who led such an unruly life as Villon doggedly proclaiming the truth he had received from the Church. In the subsequent stanzas of his Ballade, he draws to a conclusion with an explicit desire that is both humble and unshakable: “En cette foi je veuil vivre et mourir.” May it be God’s will that the Most Blessed Virgin Mary obtain for us a life and death of fidelity to the Catholic faith, which is fidelity to Jesus Christ. So doing, Mary will truly show Jesus to us after this our exile, because she can do it and she wants to.

"...show unto us the blessed fruit of thy womb, Jesus."

- Hail Holy Queen
Posted by Courage Philippines at 2:23 AM