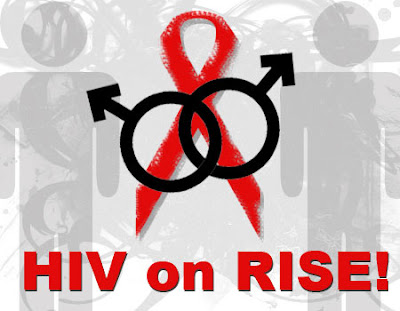 Today, we commemorate Worlds AIDS Day. I join everyone in praying for those who have died of AIDS and those who are afflicted with the disease. Here in the Philippines, the scenario is not looking good. HIV cases are soaring. From 835 cases in 2009, HIV cases have escalated to 1305 in the first 10 months of the year according to DOH. There is even a report that some blood banks have HIV infected blood products.

2. Through penetrative sexual intercourse. This is primarily due to an exchange of infected body fluids.

a. Oral - Lowest risk of acquiring the infection. The oral giver (sucker) has higher risk than the receiver (the one being sucked) of getting infected. Although this carries the lowest risk of transmitting HIV, the presence of mouth ulcers or gum disease from the oral giver can increase this risk significantly.

b. Vaginal - Women have higher risk of acquiring the infection, but the male partner is also at risk.

3. Mother-to-Child Transmission. This can occur during pregnancy, delivery, or breastfeeding.

1. Abstinence. This is undoubtedly your best defense. Practice it.

2. Fidelity. I am talking about married couples here. It is virtually impossible for a couple to acquire any form of sexually transmitted infection if they are faithful to one another and to their marriage vows.

3. Education. A plethora of information about HIV/AIDS is easily accessible and available on the internet and books. Ignorance of this matter is inexcusable.

4. Firm Moral Conviction. HIV/AIDS is not so much a medical crisis as it is a moral crisis. You cannot contract HIV in the same manner as the AH1N1 virus. The spread of the disease is facilitated by people indulging in risky behaviors and not through some means that you have no control of like air, water, food, etc. Thus, a strengthening of our moral values and convictions can put a stop on this plague.

5. Humanization of Sexuality. This is the call of our Holy Father, Pope Benedict XVI. There has to be a deeper understanding and appreciation of what sexuality is all about. There is also a need to combat the more pervasive evils plaguing our society like sexual permissiveness, pornography, prostitution, and gay agenda.

Let us read what Dr. Edward Green, a senior Harvard research scientist, has to say on the issue:

The accepted wisdom in the scientific community, explained Green, is that condoms lower the HIV infection rate, but after numerous studies, researchers have found the opposite to be true. “We just cannot find an association between more condom use and lower HIV reduction rates” in Africa.

Dr. Green found that part of the elusive reason is a phenomenon known as risk compensation or behavioral disinhibition.

“[Risk compensation] is the idea that if somebody is using a certain technology to reduce risk, a phenomenon actually occurs where people are willing to take on greater risk.” The idea can be related to someone that puts on sun block and is willing to stay out in the sun longer because they have added protection. In this case, however, the greater risk is sexual. Because people are willing to take on more risk, they may “disproportionally erase” the benefits of condom use, Green said.

1. We have a law (RA 8504) otherwise known as Philippine AIDS Prevention and Control Act of 1998 that protects persons living with HIV/AIDS.

2. If you have had multiple sex partners, engaged in risky sexual behaviors, or an active IV drug user, you are at risk.

3. An infected person usually experiences some flu-like symptoms like fever, rashes, headaches, generalized weakness a few weeks after the infection. This is the acute viral infection phase where the body is reacting to the onslaught of the virus. It is important to take note of these symptoms.

4. There is a window period of three to six months. This means that if you get infected today and you decide to get tested tomorrow, it may yield a false-negative result. The body needs around three to six months to develop antibodies to HIV that can be detected by the tests. This means that for you to get the most accurate result, you must at least wait for six months before you get tested. Please note that during this "window period" you are highly infectious.

5. The only way to know your status is to get tested. You can avail this service for a minimal fee or even free in government-mandated testing centers and social hygiene clinics. There is one in San Lazaro Hospital in Manila. You can research this on the web.

6. People with HIV can lead long productive lives. Our government can provide you with medications and other means of support to help you cope with the disease. By taking good care of your health and immune system, you can live a normal life.

I have had few sexual encounters in the past and I greatly feared the prospect of acquiring this disease. It came to a point where I experienced frequent panic and anxiety attacks. The fear was eating me up. The prospect of living with HIV is simply unthinkable.

To put my mind at ease, I had myself tested at a social hygiene clinic in Pasay City through a referral for free. If you only have the slightest idea of the hell that I went through just to finish this ordeal. The feeling was like receiving a sentence with 50/50 chance of making it through. Now, I understand why so many are reluctant to have themselves tested, yet I know it won't solve anything. And so I did it. I had myself tested.

First, the lady doctor interviewed me. She asked about my past sexual encounters. At the same time I had a mini-lecture on HIV/AIDS. This is called the pretest counseling.

And then the moment of truth. The nurse called me out and drew a blood sample from my arm and then told me to wait outside the laboratory. Fifteen agonizing minutes of what seemed like an eternity. It was too much for me and I really felt terribly awful at the prospect of walking out that clinic positive.

Then the nurse handed out the white slip to the lady doctor. She called me back and handed me the slip. I was trembling. She asked me to see the results although it was optional. The verdict is now out. I just need to read it. I broke in tears and I was really shaking. Finally, with all the courage I could muster, I opened it.

What a relief! The doctor congratulated me and gave me some post-test counseling. She advised me to be very careful next time and to use condoms (oops, that one I don't agree with). What can you expect, it's a government-funded clinic. Anyway, that's the scariest thing I have experienced so far in my whole life and I am blogging about this to sort of pay back. It is really sad to note that despite the abundance of information on HIV/AIDS and condoms you can buy in three different flavors (chocolate, vanilla, and strawberry) at your nearest convenience store, the infection rate continues to climb up.

Think positive. Stay negative.
Posted by Courage Philippines at 9:47 AM