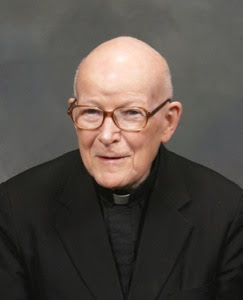 It is with deep sorrow that we receive the news of Fr. John Harvey's death.
He has embodied the ministry that he has founded, his person characterized by that same word - COURAGE.

He is one of the few priests who dared to love the person struggling with same-sex attractions with the unconditional love of Father God. His ministry has raised hope for the homosexual person saying "nothing is impossible with God". We shall forever remember him as the champion of love.

It is indeed providential that he died on the feast of St. John the Apostle - for he is the "new John" of our times, giving his life until the very last days of his old age, witnessing the resurrection to new life in Christ of every man and woman who has entered and persevered in the Courage apostolate, and leaving behind a gospel of love - teaching that anyone can be Jesus' beloved.

Fr. Harvey was the founder and national director of Courage, which is a spiritual support group for homosexual women and men. He had been director of Courage since its foundation in 1980 at the request of the late archbishop of New York, Terrence Cardinal Cooke. Courage continues to reach out in the United States, in Canada, England, the Republic of Ireland, Poland, Mexico, Slovakia, Singapore, Hong Kong, Australia, the Philippines, and New Zealand. Today, there are more than 100 Chapters of Courage worldwide.

We thank the Eternal Father for giving you, Fr. John Harvey, to all of us. Thank you for allowing yourself to be used by Divine Providence to teach us the true Gospel of love. Mabuhay ka Padre!